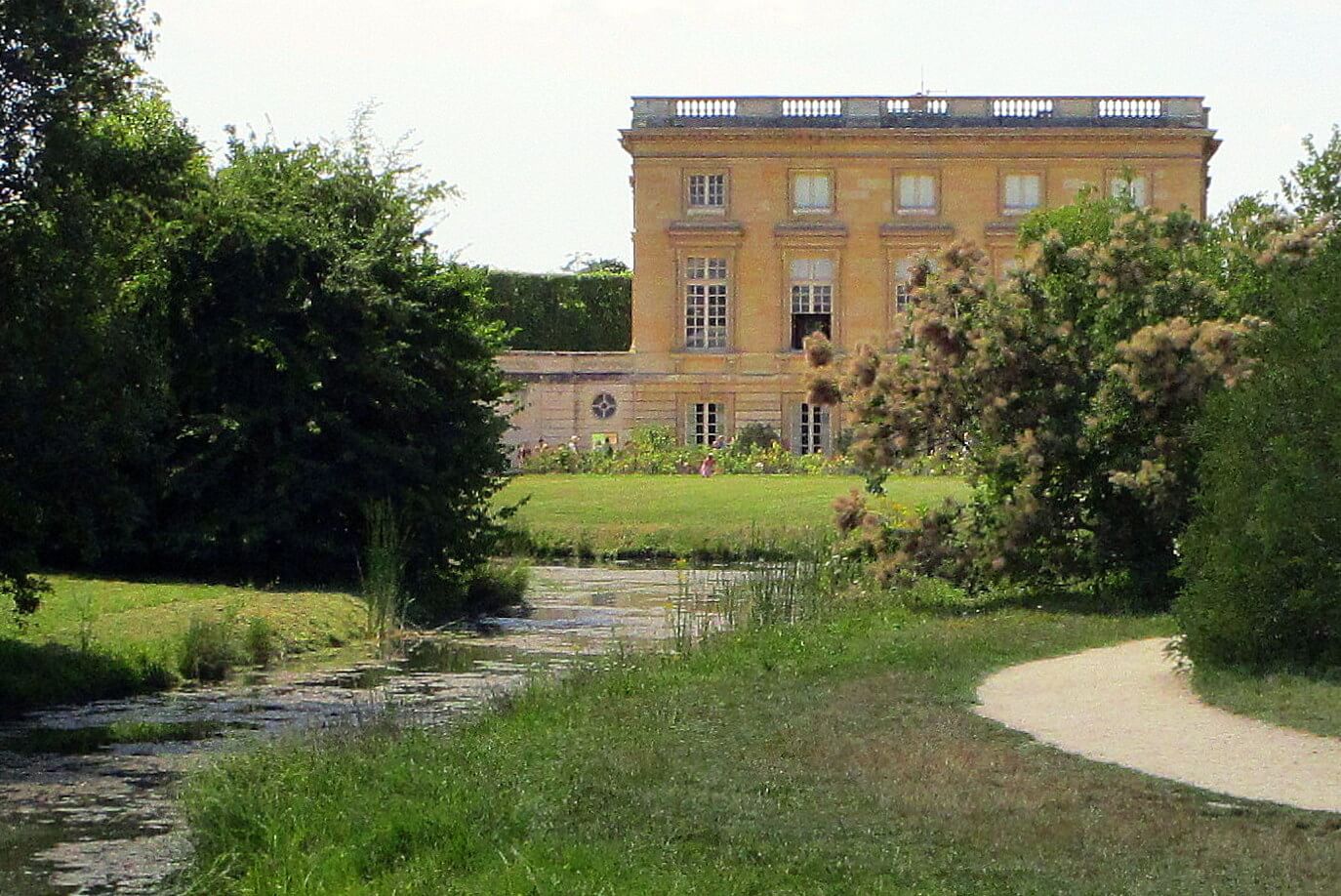 Marie Antoinette's Estate is a quiet haven, compared  to the crowded Palace of Versailles. It was in Marie Antonette's time, and it still is today. Most of the many visitors of the palace and gardens don't bother coming here. And that's a mistake, because here you can see the intimate chambers of the ill fortunate queen where she acutally lived in.

The estate consists of the Petit Trianon, the Trianon Gardens, with the Queen’s Hamlet, Temple of Love and other buildings. The Grand Trianon is also part of the estate.

Marie Antoinette was only 14 years old when she came to Versailles to marry the dauphin of France, the later King Louis XVI. Their wedding celebrations in May 1770 lasted for over two weeks with 5,000 people on the guest list.

None of these guests were from her 'side', as she had to leave her family, friends, servants and even her dog behind when she passed the border of France.  When King Louis XVI, the grandfather of her husband, died, she became Queen of France at age 19. King  Louis XVI gave the Petit Trianon and its surrounding gardens to his wife, as a late wedding gift. The little chateau was originally built in 1763 for Madame de Pompadour. She was the mistress of King Louis XV, but she died before it was even finished, so the palace was never really used.

Marie Antoinette loved this little palace, where she could hide from the crowd and strict etiquette at the Versailles Palace. The area is since known as Marie Antoinette's estate, or in French, the 'hameau de la reine'. 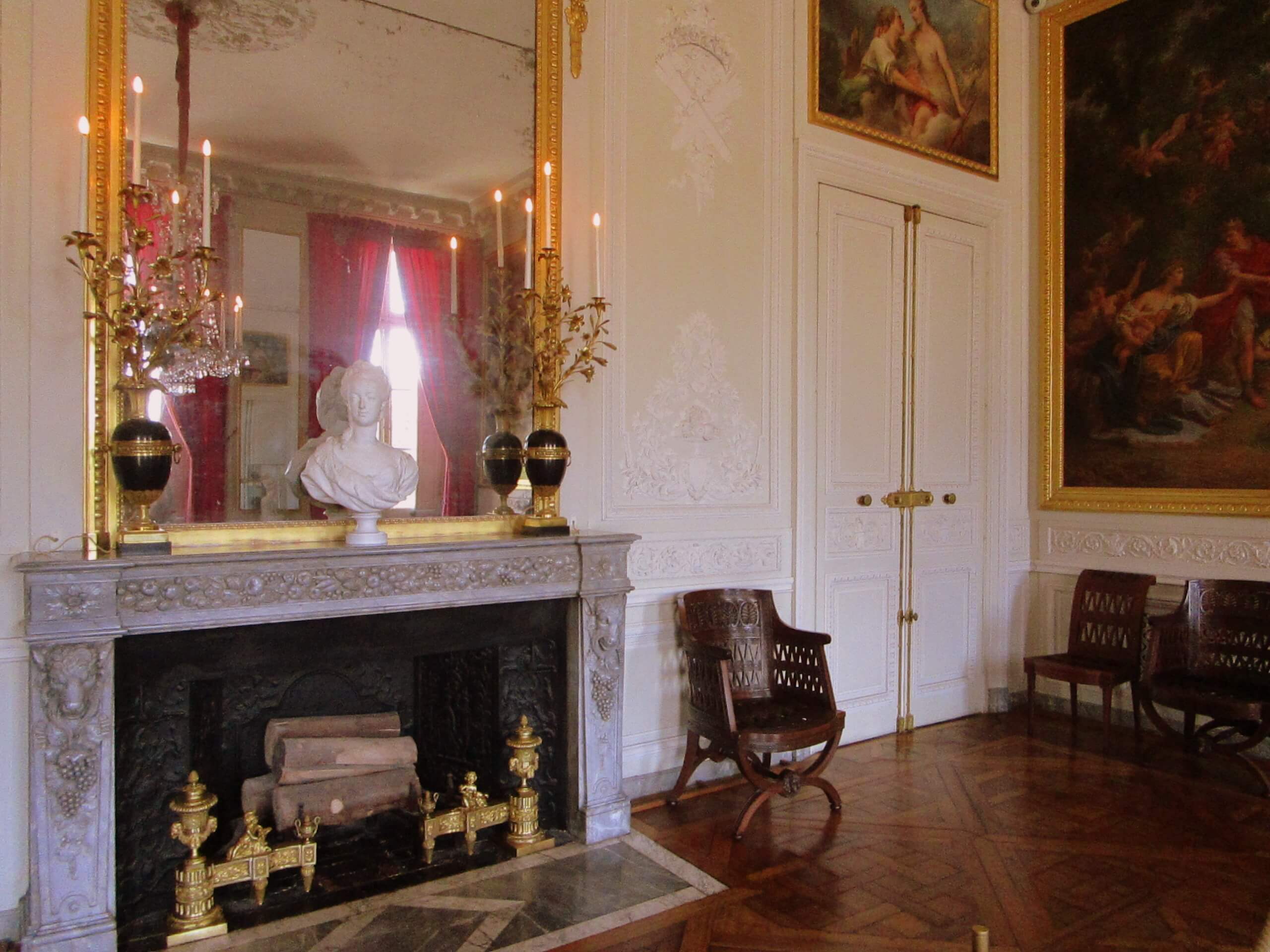 Only a few rooms are open for a visit, but it gives you an idea why the young Queen would rather be here than at the main palace. You can visit the lovely bedroom that is restored and the salon. In the tiny palace was a large room that was used to reheat food delivered from the Versailles kitchens.

There was also a bedroom for king Louis XVI , but although he visited Marie Antoinette's domain and had dinner there sometimes, he never spent the night. Rumors are that other men might have had the pleasure, like the Swedish Count Axel von Fersen. This, or any affair that Marie Antoinette may have had, is still debated though. 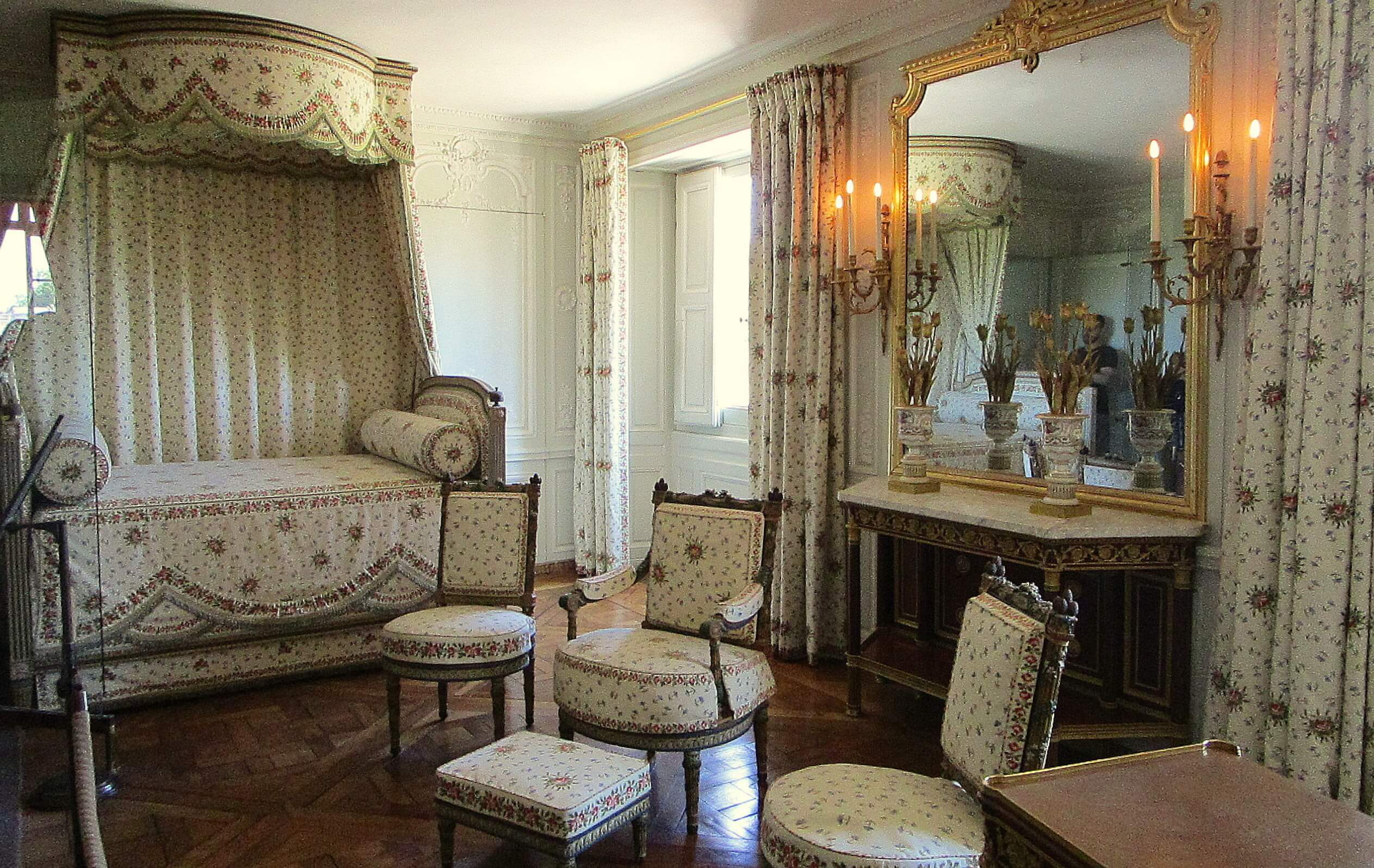 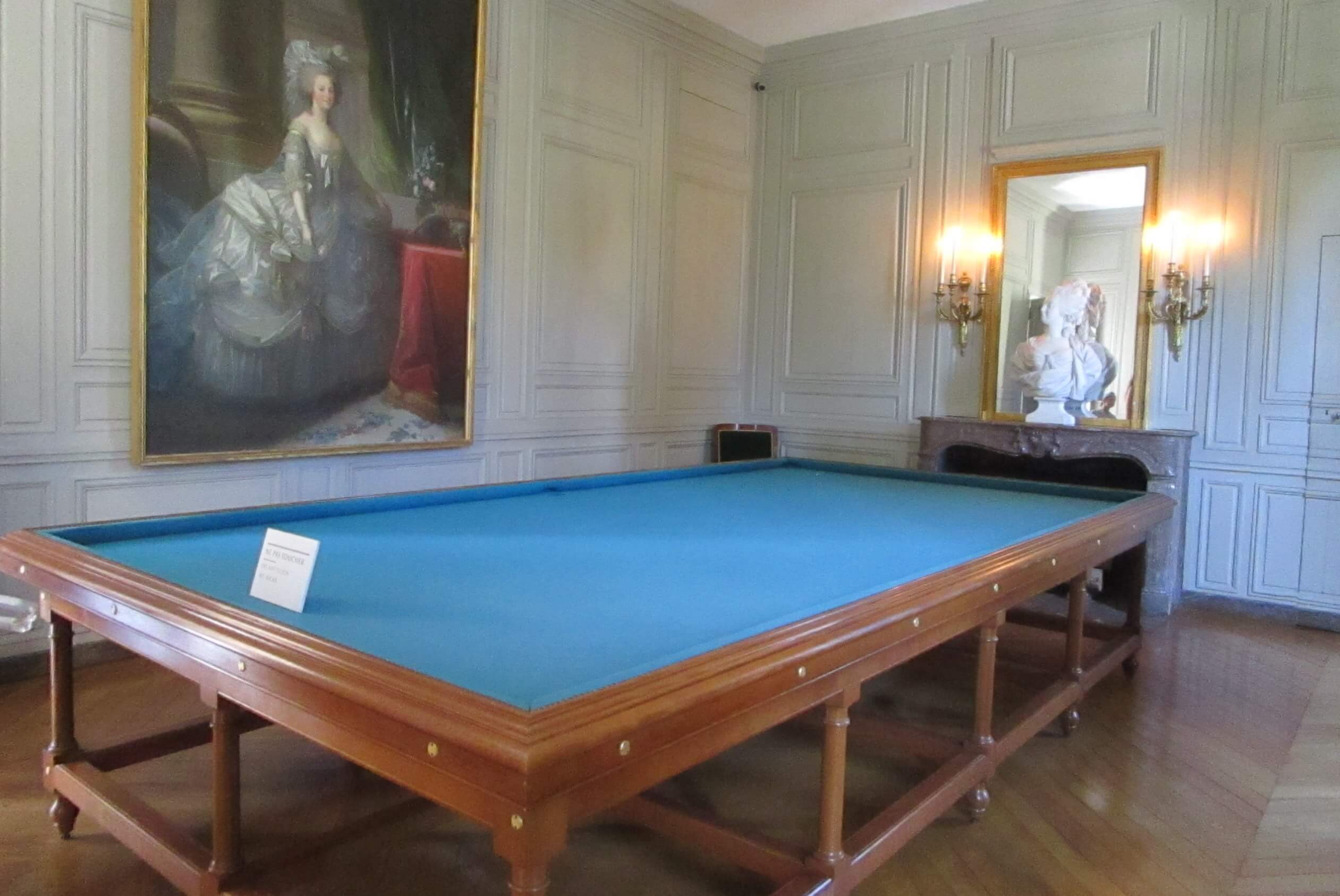 The little Trianon Palace became a haven for Marie Antoinette, she could relax there and invite the people that were intimate to her. She and her guests spend their time gambling, played billiards in the billiard room, and giving or enjoying musical and theater performances. Marie Antoinette starred in the plays as shepherdesses, villager or chambermaid.

She had an official 'reader to the Queen', who would read to her. She also looked into her 'Gazette des atours', a journal about her wardrobe, containing bits of fabrics, colors and pictures of her dresses. "The Wardrobe Book of the Queen was presented to her daily by her Mistress of the Robes together with a pincushion; Marie Antoinette would prick the book with a pin to indicate her choices." from 'Marie Antoinette: The Journey' by Antonia Fraser.

If you read or watch 'Farewell My Queen' by Chantal Thomas you can get a glimpse of the life of Marie Antoinette and the other courtiers at Versailles and at the Petit Trianon.

The Petit Trianon Gardens are very different from the Gardens of Versailles. In line with fashion of those days, they are English gardens, informal, organic and somewhat wild, opposed to the strict geometric shapes of Le Notre. There are tiny paths, a reproduction of a Grotto and an artificial lake.

Inspired by the works of Rousseau, the queen took the outdoor life very serious; she even had a replica of an 18th-century village build on the shores of this lake. This part of the Estate is known as the Queen’s hamlet. 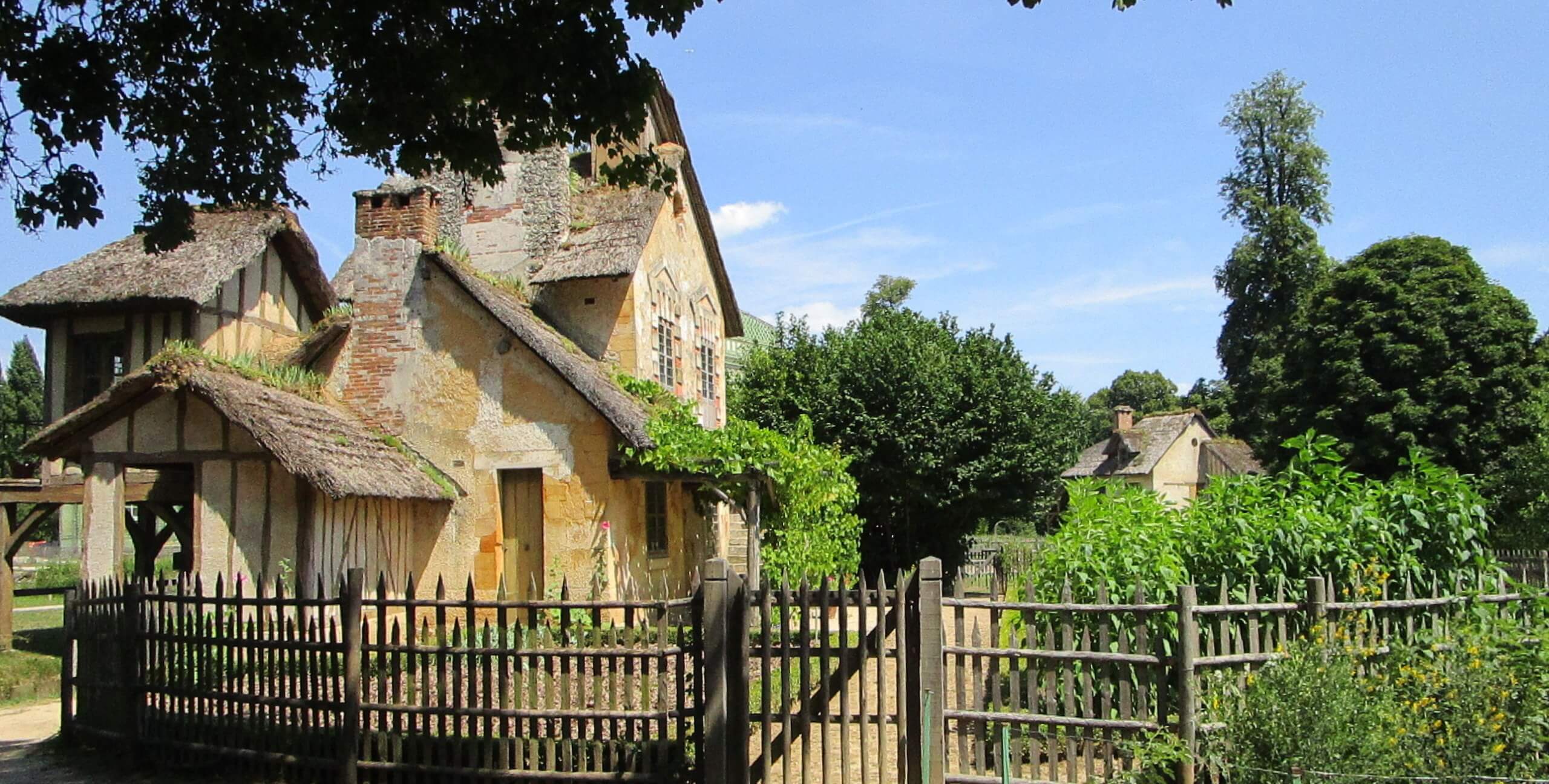 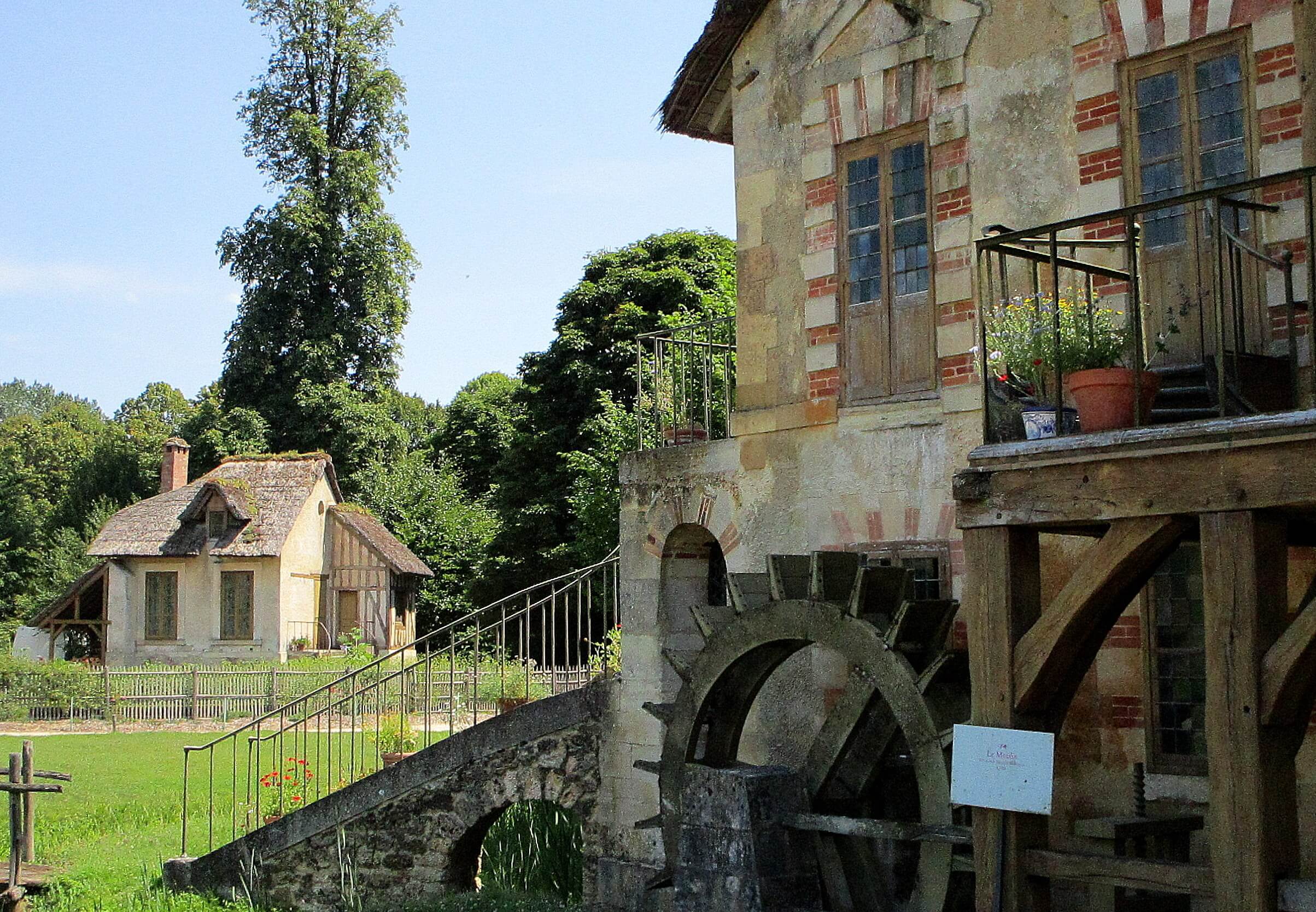 A number of cottages were effectively used for agriculture. The queen wanted to experience a real rural lifestyle, so she and her maids-of-honor would milk cows, feed the chicken and churn cheese. Of course the buildings were very comfortable inside, and life at this farm was nothing compared to the real peasant life in France that she romanticized so much.

Playing farm is not easy wearing a wide-panniered court dress. Marie Antoinette set a new and rather chocking trend when she started to wear a simple white dress called the chemise à la reine (or "chemise of the queen") in the early 1780s.

The public was outraged by the painting 'La reine en gaulle' by Elisabeth Vigée-Lebrun. Marie Antoinette wears her new clothes, but the dress looked like the basic undergarment that all women wore at that time. Despite this protest, the style became quite popular across Europe.

The Versailles Palace has over 8 million visitors each year. Only a small part of them visit the Queens estate. The area is peaceful and quiet, and you can wander around without being hit by a selfiestick. This is the only area of the whole Versailles estate where you can actually make pictures without people on it.

If you plan to visit Marie Antoinette's Estate, do note that it opens from 12:00 pm to 6:30 pm and is closed on Mondays. You can reach the estate from the Versailles gardens.

If you do not want to enter the palace and palace gardens, you can go around. If you are in front of the palace, you can go right to the boulevard de la Reine, onward to the Avenue the Petit Trianon. It is about 2,2 km. I was very happy I had my bike, with me; a day at Versailles means vast distances to cover! Read more tips on Visiting Versailles here. 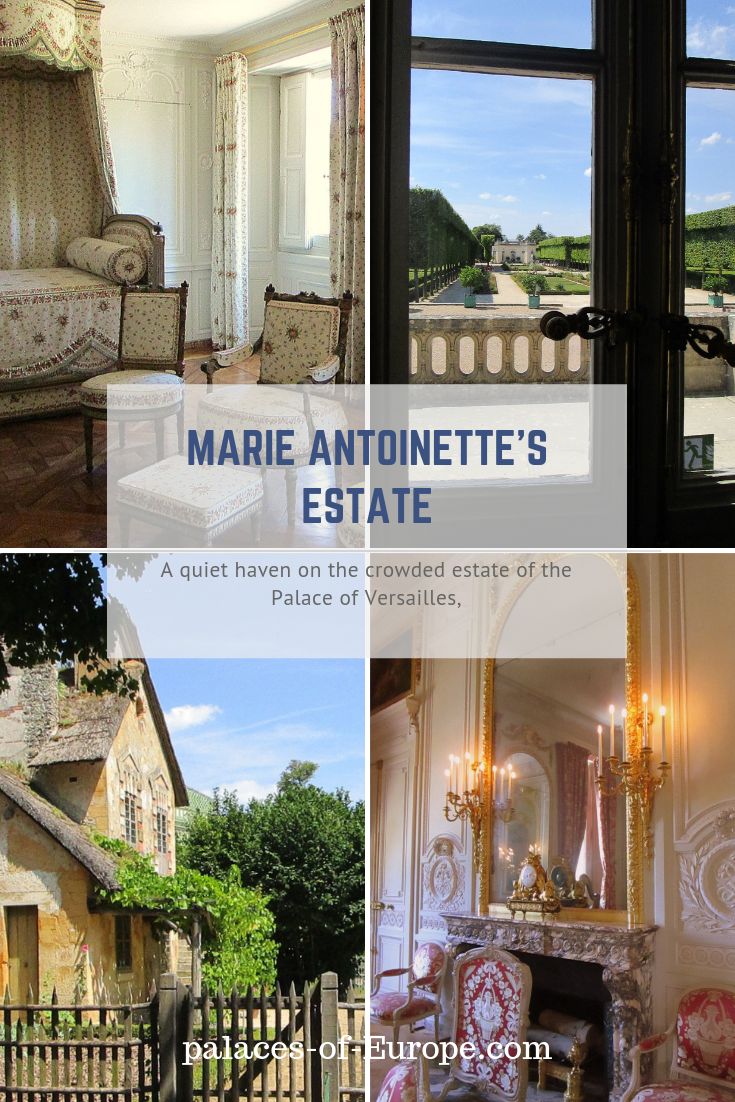 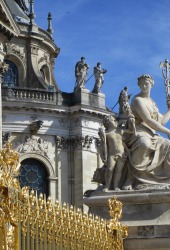 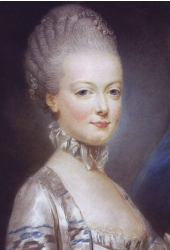 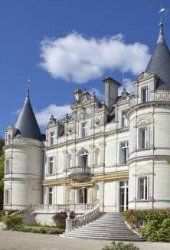