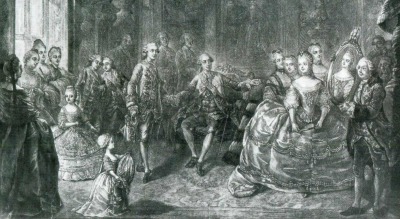 All the Dauphine had seen of his wife to be is a portrait. On the picture you can see  the presentation of Maria Antonia's portrait at the court of Versailles.

Both King Louis XV and his grandson, as well as the other members of the royal family are curious, and happy with what they see.

King Louis XV is the one sitting down, Louis Auguste is the one to the left.

But even if they would have been disappointed with the looks of Marie Antonia, this was not important since the marriage was necessary to improve the relations between France and Austria.

Maria Antonia Josepha Johanna was born on 2 November 1755 as the youngest daughter of Emperor Francis I and Empress Maria Theresa. 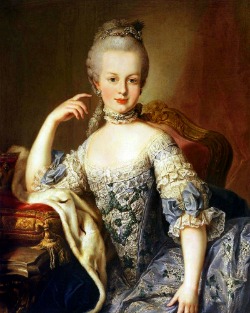 Archduchess Maria Antonia at the age of 12, painted by Martin van Meytens in 1767.

She was one of 16 children who grew up at the Hofburg Palace in Vienna. She had a carefree childhood with her siblings with whom she was very close, especially with her sister Maria Carolina who was around the same age.

Marie Antoinette’s mother, the Empress Marie Theresia loved her children and treated them with affection, making it a habit to write them once a week after they left the Hofburg.

Nevertheless she also used them in her political strategies to make allies throughout Europe, even against the wishes of some of the children. Her favourite daughter, Maria Christina, who was 13 years older than Maria Antonia, was the only one who was allowed to choose her own husband. The other children were send off to marry someone they had never met.

This was the same for Maria Antonia, who left Austria at the age of 15, and would never come back or see her mother again. 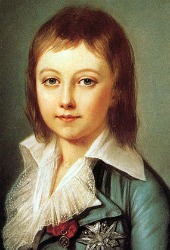 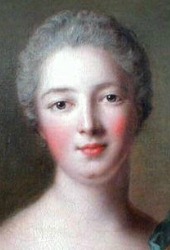 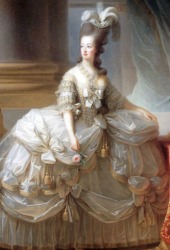 The consumption of the marriage was in the interest of all members of court, since conceiving an heir to the French crown was of course the first and most important task of the young couple, especially after Louis XV died of smallpox in 1774. Louis XVI became King and Marie-Antoinette Queen of France, and they needed a successor. However, it would last 7 years before Marie-Antoinette got pregnant with her first child.

Of course rumours where that Louis XVI was impotent and his wife was looking for affection with others, both male and female. The birth of their first child could not stop these rumours and would go on for the rest of Marie Antoinette’s life (and even after that).

The most persistent rumour (and probably truth) was that of the affair with Count Axel von Fersen, a nobleman from Sweden. 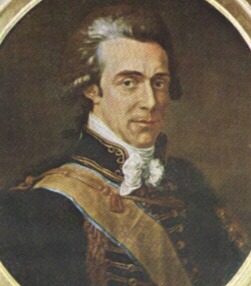 They first met in 1774 and would be in touch during the rest of Marie Antoinette's life. If the relationship was platonic or not is impossible to verify, but they were very close.

Fersen was also very close to Louis XVI and he was the one who initiated the escape plan in the later life of the royal couple, when they fled Paris during the French Revolution.

Read "A Day With Marie Antoinette" by Hélène Delalex. Featuring personal correspondence, lavish illustrations, and a wealth of unpublished material on Versailles and the life of Marie Antoinette’s.

Becoming a mother at last 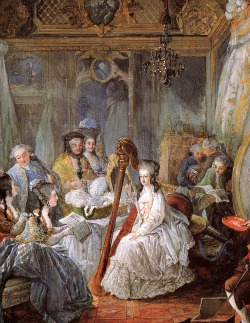 Marie Antoinette playing harp at one of her soirees at Versailles Palace.

As producing an heir was the main task all eyes where on the young couple during these 7 years.
Empress Maria Theresa would write her daughter every week, making it clear to her what was expected and what problems it could cause if Marie Antoinette did not get pregnant. Even an annulment of the marriage could be the result.

Marie-Antoinette tried to pass the time by shopping, partying and gambling, Louis XVI went hunting every day. Don’t forget they were teenagers and they were very naïve.
Only after a long visit of the Emperor Joseph II, the brother of Marie Antoinette, the problems in the marital bed were solved and the first pregnancy was a fact in 1778.

The first child was a daughter, Marie Thérèse, born on 20 December 1778.

The pressure to produce an heir to the trone of France continued. After a miscarriage in 1779 the long-awaited son was born on 22 October 1781. His name was Louis Joseph Xavier François,  Dauphin of France. Marie Antoinette had 2 More children after that; Louis Charles, born on 27 March 1785 and Sophie Beatrix on 9 July 1786. 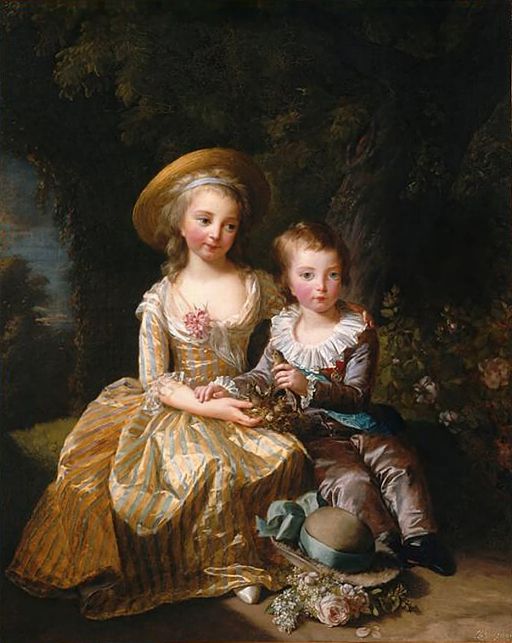 As was custom at those days the birth took place in a room full of courtiers. It was important to have as many witnesses to the birth as possible so no one could claim the new-born baby was sneaked in the room somehow.

Sad to say the Empress Maria Theresia of Austria died in 1780, so she was not able to witness this final triumph of her daughter. Marie Antoinette and Louis XVI had 4 children together.

The first dauphin Louis Joseph Xavier died at the age of 7, and his baby sister Marie Sophie only lived for eleven months. The story of the surviving children is horrible, you can read it here. 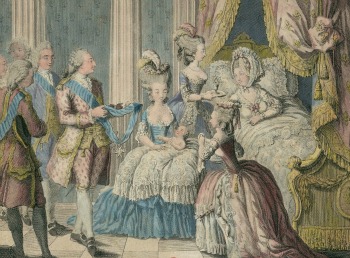 More about the Children of Marie Antoinette and Louis XVI

During her years at Versailles the popularity of the Austrian Princess declined rapidly. Due to the rising costs of financing the war in America and the unfair tax rules of France ( where church and nobility did not pay any taxes) the financial situation of France was deteriorating. The people were poor and the unpopularity of the king and queen was growing, leading to the storming of the Bastille and the start of the French Revolution on 14 July 1789.

In Versailles court life continued as if nothing had changed, although more and more courtiers made their escape abroad whenever  they had the change. (A beautiful book and movie about this strange and frightening  period is Farewell, My Queen by Chantal Thomas). Marie Antoinette was told to flee, but she did not want to leave her husband alone. 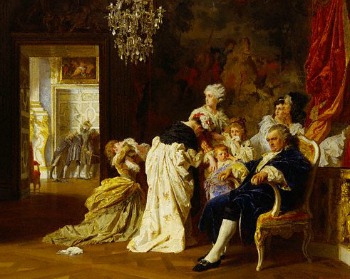 Louis XVI, Marie Antoinette and their Children listening to the angry mob outside Versailles Palace, October 6, 1789. Painted by Gyula Benczur

On 5 October 1789 and angry mob of mostly women from Paris marched to Versailles Palace and tried to invade the royal appartments. Their goal was to kill Marie Antoinette. They did not succeed, but when things calmed down the did force the royal family to quit court life at Versailles and come to Paris.

They were moved to the Tuilerien Palace where they would live under constant supervision until 13 August 1792.

During their stay at the Tuilerien the power of the monarchy declined. 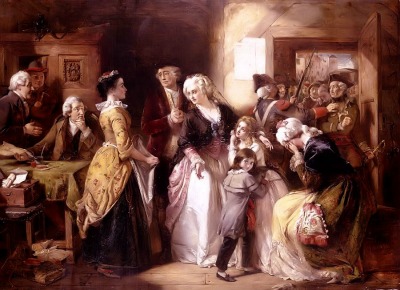 Arrest of Louis XVI and his family in Varennes, 1791

On 21 June 1791 the royal family attempted to escape Paris. In the middle of the night they, one by one, sneaked out of their apartement and met at a carriage that was governed by Count Fersen.

The party consisted of the King and Queen, their two children, the dauphin's governess and the sister of the King Madame Élisabeth.

They made it out of Paris, but due to various errors in the plan they were captured in the town of Vareness. They were taken back to Paris and locked into the Tuilerien again. Any credibility the King had until this atempt to escape would increase quickly. 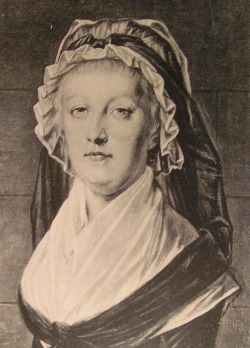 Marie Antoinette imprisoned at the Temple

On 10 August the Tuilerien Palace was stormed by the enemies of the monarchy, and the Swiss guard was slaughtered. The royal family had fled to the Assembly.

After this they were imprisoned in the Temple tower, were they would stay until their execution. Louis XVI was found guilty of treason and he was beheaded by the guillotine on 21 January 1793.

On 3 July the little Dauphin was separated from the women in the tower, Marie Antoinette was not allowed to see him again.

The Widow Capet as she was called after the dead of her husband was taken to the Conciergerie as Prisoner No. 280 on 1 August. She would spend the last six weeks of her life there. She had to leave her children behind. Here you can read what became of them. 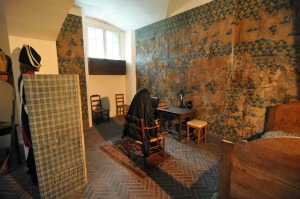 The worst of all accusations (especially for herself and her daughter and Sister in Law who were alive to witness these lies) were of incest with her son.

On 16 October 1793 Marie Antoinette was beheaded at the place the la Revolution ( nowadays the Place the la Concorde). She was 37 years old.

She was buried in an unnamed grave where they had also put the body and head of Louis XVI. After the restoration King Louis XVII exhumed the bodies and they found their final resting place in the necropolis of French Kings at the Basilica of St Denis.

You can find a funerary monument there dedicated to the royal couple which is slightly romanticized and does not really do justice to the truth if you compare it with other images of the couple. You can find the Basilica in Saint Denis, a suburb of Paris.

Books and films regarding Marie Antoinette:

I love these films on Marie Antoinette, especialle the one with Kirsten Dust. It is based on Antonia Fraser's biography, but the contemporary sountrack and the quick and beautifull scenes make it far easier to digest!

Also a great book and movie is "Farewell, My Queen" where you can view court life through the eyes of the servant Sidonie Laborde, who is reader to the Queen. Gives another perspective on things!

Back to Palace of Versailles