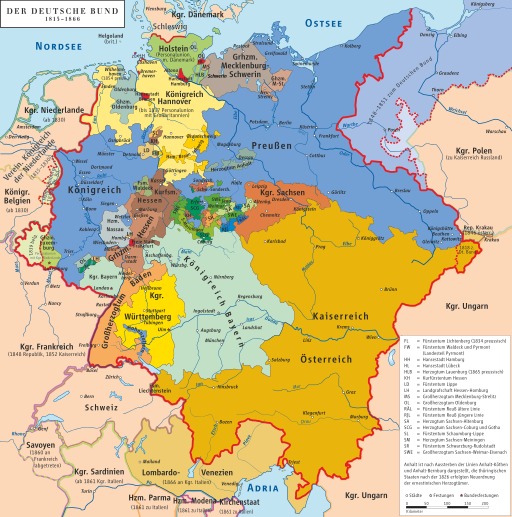 This rich history is partly the cause of the fact that there are many German palaces and castles.

Four of the main kingdoms that once ruled Germany are the Kingdom of Bavaria, Prussia, Saxony and the Kingdom Württemberg.

The Kingdom of Bavaria was created in 1806 and was ruled by the family of Wittelsbach.

The most famous member of this family is undoubtedly Empress Elisabeth. Before her marriage to the emperor of Austria she held the titles Duchess in Bavaria and Princess of Bavaria. The title Duke of Bavaria was reserved for members of the ruling family Wittelsbach, to which Sisi's mother belonged as daughter of King Maximilian I of Bavaria and Queen Caroline. Sisi's father, Duke Max was Duke in Bavaria, because he belonged to the sideline of the family who is not eligible for the kingship.

Another famous member of the Wittelsbach family was King Ludwig II. Partly thanks to the fact that he has built various precious fairytale castles. This building drift eventually became his downfall. When the Treasury was almost empty and Ludwig did not bother to get involved with Affairs of the State anymore, he was declared mad by the Government and imprisoned in Castle Berg near lake Starnberg (unfortunately not open to the public).

Ludwig II died on June 13, 1886 under mysterious circumstances when he drowned in Lake Starnberg, together with his psychiatrist Dr. Bernhard von Gudden. Seven weeks after his death, his beloved castles were already opened to the public!

The Kingdom of Prussia was ruled by The House of Hohenzollern since 1701. The name of the dynasty is derived from the Hohenzollern Castle at Hechingen.

The kingdom covered two-thirds of the German Empire. The most famous monarch of this dynasty is Frederick II or Frederick the Great (1712-1786).

Potsdam was the residency of the Brandenburg-Prussian electors for centuries. In particular the castles and parks that were built in the 18th century by order of Frederick the Great, are landmarks of the city. The domain covers a surface of 500 ha and about 150 buildings are part of it.
Schloss Sanssouci and its 290 hectares park are the oldest and most famous parts. Everything is laid out and built between 1730 and 1916. Also, Schloss Gleinicke, Schloss Sacrow, Schloss Babelsberg, Schloss Cecilienhof and the surrounding parks are part of the world heritage site.

The rulers of Saxony had come from the House of Wettin for 800 years.  The new Kings of Saxony belonged to the same dynasty.

The royal houses of several European countries are related to this house. They delivered Kings to Poland, Bulgaria, and Portugal. A side branch of the family still occupies the thrones of the United Kingdom and Belgium.

Dresdner Zwinger Palace Built by Augustus the Strong of Saxony

Fortress Königstein, daytour from Dresden or from Prague. 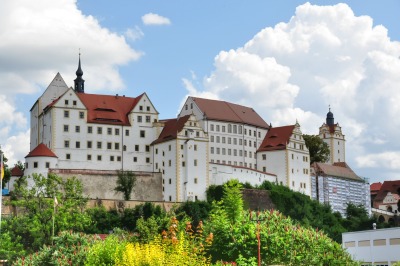 Colditz Castle was a notorious prison during WW II. It was thought to be the best-secured prison and allied officers who had escaped from other prisons were brought here.

Colditz Castle became famous because of the many attempts to escape though, and some 36 prisoners did escape!

If you visit this castle the main emphasis is in this period. There is not much left of the long history of the castle (first build in 1046) before the war.

You can sleep in the Youth Hostel, which is within the Castle. The hostel has four to six-bed rooms. Families are welcome to in the family rooms!

Another fairy tale castle in this region is Schloss Lichtenstein. Although it looks like a medieval castle the current structure was built in 1840-1842. The castle owner Duke Wilhelm of Urach, Count of Württemberg ordered the built in a romantic Neo-Gothic design.
It has beautiful breathtaking views of the surrounding countryside, build on top of a rock, 817 meters above sea level. The castle is still owned by the descendants of the duke of Urach today.