Austrian Palaces, homes of the Habsburgers

The Habsburgs, who ruled Austria from 1526 to 1804, left behind the magnificent Austrian palaces. The grand estates like the UNESCO World Heritage Site, Schonbrunn Palace and the Hofburg in Vienna are of course top of the list. But the more modest summer residence like Schloss Hof and the Kaiservilla are also worth a visit.

The Austrian monarchy is also known as the Habsburg monarchy or the Habsburg empire. The House of Habsburg ruled Austria and surrounding countries from 1526 to 1804.

In addition to these domains, the Habsburgs rulers were also emperors of the Holy Roman Empire. This forced the Emperors to deal with all these different tasks and regions with great contradictions on cultural and administrative areas.

Still, they managed to make a union out of it. In 1804 emperor Francis I united all the countries of the United Monarchy under one Crown. He founded the Empire of Austria. 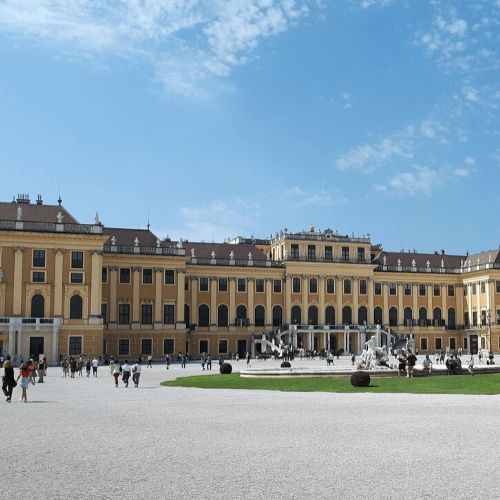 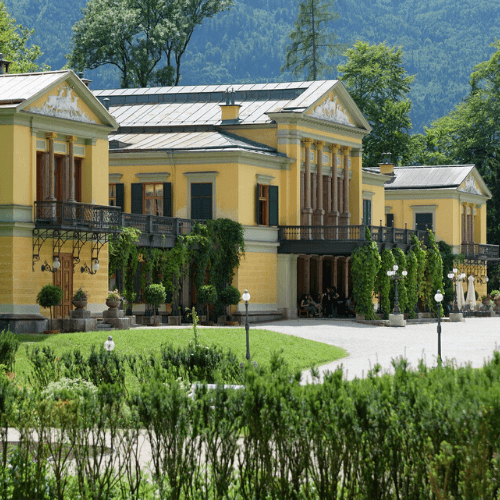 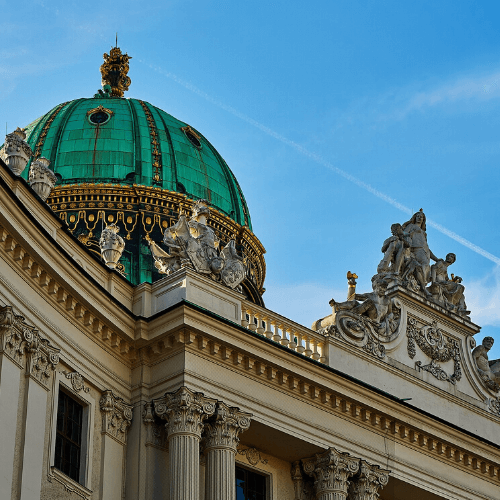 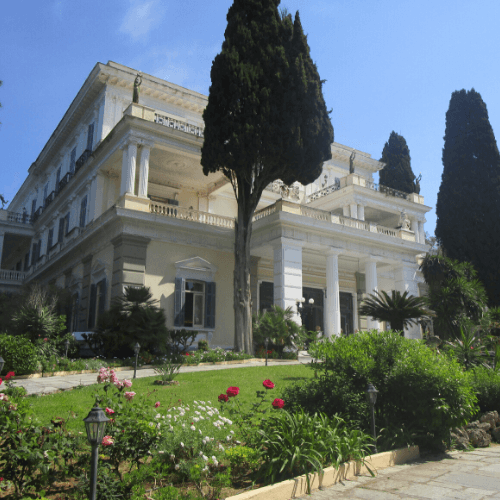 (I know, not an Austrian palace, but built by Empress Elisabeth of Austria!) 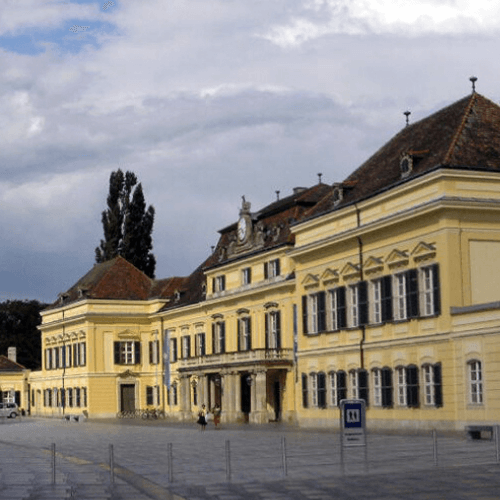 Origin of the Habsburg empire 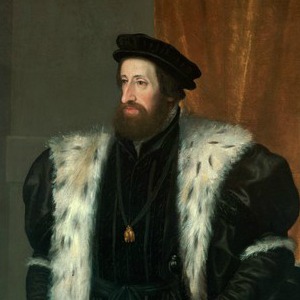 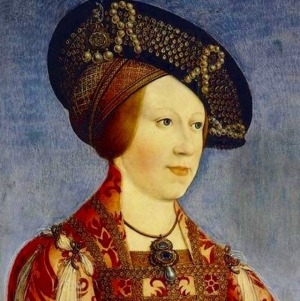 The origin of the Habsburg empire is found in 1506. The Holy Roman Emperor Maximilian I and King Vladislaus II Jagiello of Bohemia agreed to a double marriage contract. Maximilian's youngest grandson Ferdinand married Vladislaus' daughter Anna.

At the same time, they agree that Maximilian's granddaughter Maria would marry the yet unborn (!) child of Vladislaus ' pregnant wife. Luckily she delivered a boy (Louis), so also this marriage could proceed.

In 1521 Ferdinand and Anna got married, and in 1522 Maria and Louis also got married. These strategic marriages had to provide a solid dynasty.  This was necessary to offer resistance against the advancing Ottoman Turks.

It worked; after the death of King Vladislaus II his territories went to the Habsburgers. The Habsburg House reigned large parts of Europe until 1918. They also delivered the holy roman emperor very often. 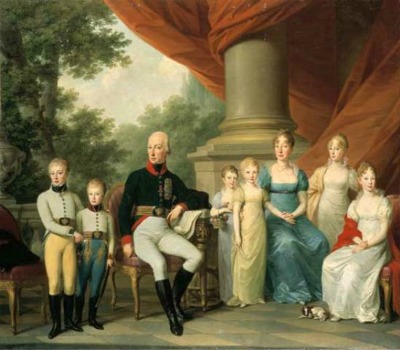 The Austrian imperial family around 1805, by Joseph Kreutzinger. On the rights is Archduchess Maria Louise, the later Empress Marie Louise of France

Francis was afraid of two things. He could become lower in rank than Emperor Napoleon and the Russian Tsar. Or even worse, Napoleon could take over the title of Holy Roman Emperor.

Francis abdicated on 6 August 1806 as Holy Roman Emperor and disbanded the Holy Roman Empire altogether.   He replaced it with the Empire of Austria. He himself became the hereditary emperor Francis I. 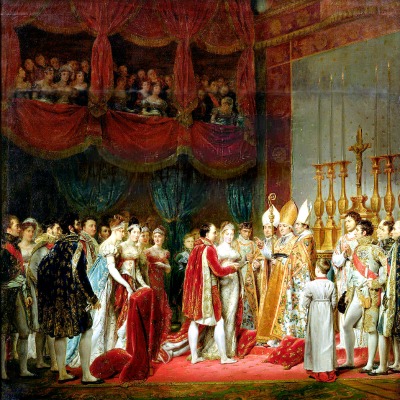 Painting by Georges Rouget of the marriage ceremony of Napoleon with Marie Louise of Austria in the Louvre chapel, 2 April 1810.

In 1810 Napoleon defeated him on another issue. He married Frances'daughter Archduchess Marie Louise of Austria. Napoleon wanted a wife from an old royal house to give him some Royal allure. He also needed a successor, since he had no legitimate son yet.

Francis II could not refuse Napoleon at the time, but he always felt it as his greatest disgrace, to be the father-in-law of Napoleon!

He proceeded with the wars against Napoleon and finally triumphed in 1815 with the battle of Waterloo.

Famous ( and not so famous)  residents of the Austrian Palaces 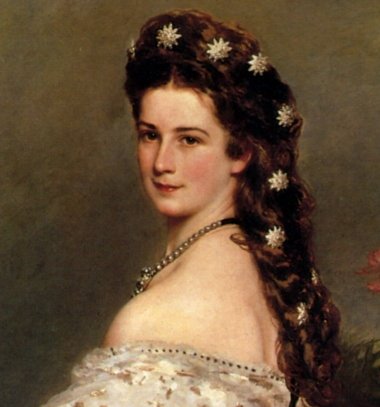 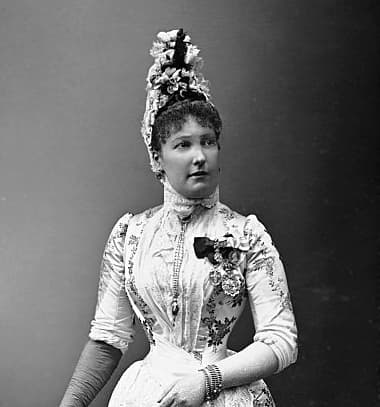 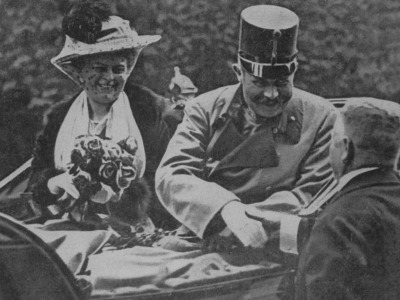 Archduke Franz Ferdinand, nephew of Emperor Franz Josef and heir to the Austro-Hungarian Empire, together with his wife Sophie, Duchess of Hohenberg on their tour in Sarajevo. They are both shot to death by a Serbian nationalist a few minutes later, on 28 June 1914.

In 1889 Crown Prince Rudolf, the son of Emperor Franz Joseph I and Empress Elisabeth, commits suicide. Franz Ferdinand, the nephew of the Emperor, becomes heir to the Austrian throne.

He is the son of Archduke Charles Louis of Austria and Maria Annunciata of Bourbon-Two Sicilies.

Franz Ferdinand is assassinated in Sarajevo on 28 June 1914. This assassination triggers the events leading to the 1st World War.

After this murder, the search for a new heir begins again. Otto French, the brother of Franz Ferdinand already died in 1906. His son Charles becomes the last emperor of Austria. Franz Joseph is his great-uncle.

Charles I of Austria, also known as Charles IV, King of Hungary, governs only two years, from 1916 to 1918. After the first world war, Charles pulls himself back from all matters of state. This is, in fact, the end of the power of the Habsburgs.

Still, it takes up to 1961 before Otto of Habsburg-Lorraine, the son of Emperor Charles I, renounces his right to the throne of Austria. The Habsburg descendants are still active in politics.

What remains of the mighty Habsburg House is an abundance of castles and palaces. Not only in Austria, but in all parts of the Habsburg Empire. And great stories of famous Habsburgers like  Empress Maria Theresia, Charles II of Spain and Empress Sisi.

Books on the Habsburgs: