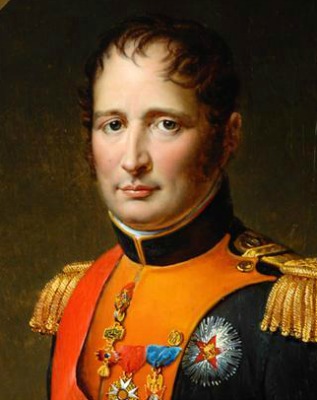 Joseph Bonaparte was the elder brother of Napoleon. He studied law and was a politician and diplomat, supporting his brother where he could, but did not always agree with him.

Like all of the members of the Bonaparte family, he was pushed around on the whims of his brother Napoleon.

Joseph bought the château of Mortefontaine, 19 miles north of the Paris.

His hospitality was evidend. The chateau was used for the weddings of Joachim Murat with his sister Caroline Bonaparte on 20 January  1800 and that of Camillo Borghese to his other sister Pauline Bonaparte on 5 November 1803. Also, some treaties where signed here.

Joseph would have been perfectly happy staying there, being the landlord and improving his estate.

However, Napoleon had other plans for him. He made him King of Naples and Sicily in 1806. 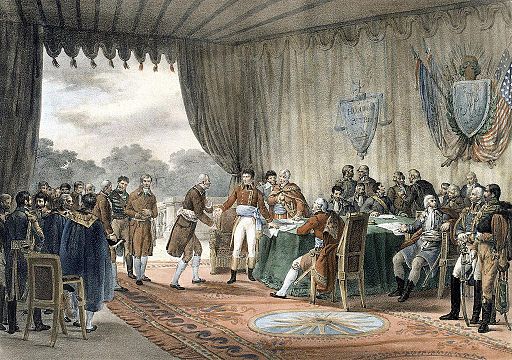 The Signing of the Treaty of Mortefontaine, 30th September 1800. Painting by Victor-Jean Adam

King of Naples, king of Spain

The king of Naples resided in Il Palazzo Reale di Napoli (the royal palace of Naples). Joseph started to make progress in Naples and he was quite popular. He abolished feudalism and introduced educational, judicial and financial reforms.

This popularity was probably a thorn in the eyes of napoleon, within two years this kingdom was given to Joachim Murat, the husband of Caroline Bonaparte, very much against the wishes of Joseph himself.

Napoleon had a new job for Joseph after he had invaded Span and he made him King of Spain. Joseph and his family now moved to the Palacio Real de Madrid (Royal Palace of Madrid).

Joseph was not welcome in Spain, the Spanish saw him as an usurper. He was not happy himself, he abdicated on four different occasions and asked his brother to send him back to Naples, but Napoleon refused.

After he finally had to to give up his throne in Spain in 1813, he went back to the château of Mortefontaine. Of course, when Napoleons was defeated he had to flee France too and leave his beloved estate.

The first time he fled to Switzerland, and after the final abdication of Napoleon in 1815 he fled to the United States of America on false papers. Europe was not an option anymore, In France, a new law of 1816 banished the Bonapartes from France and confiscated their property. Many other countries of Europe also placed restrictions on the Bonapartes.

Joseph was able to get much of his wealth to the USA though, and bought the estate Point Breeze in New Jersey.
The Bonaparte estate became a cultural center and guests, both new American friends and French exiles visited the house all the time. Jospeh was known for his hospitality.  His wife and kids did not follow him to the USA, he did not see theme again for 25 years! In 1832 Joseph moved to London to be closer to France.

Julie Clary, wife of Joseph Bonaparte, with her two daughters

The house he lived in at Point Breeze was pulled down in 1850. The only reminder of his presence there is Lake Bonaparte, located in the town of Diana, New York, United States, which is named after him.

In the meantime his wife, Marie Julie Clary, and their daughters stayed in Europe, living in Frankfurt, Brussels and finally settled in the Serristori Palace in Florence, Italy.

This Palace is an Excellent apartment hotel these days. Joseph finally joins his wife here in 1840 and dies here in 1844. Julie dies only eight moths later and they were buried together at the Basilica of Santa Croce in Florence. In 1862  the self-proclaimed French Emperor Napoleon III reburied Joseph in Les Invalides, Paris.

Julie’s remaind staid behind in Florence… 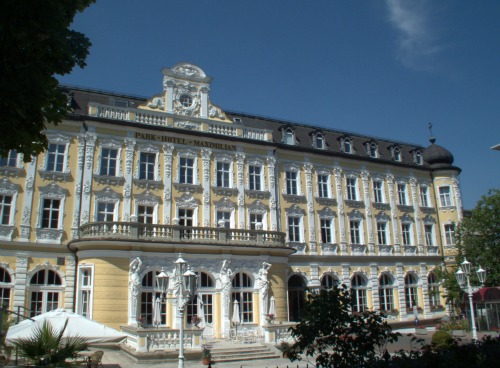 Former home to Joseph Bonaparte and his family, this Palazzo is close to all Florence's wonderful sights, and also far away from the tourist crowds to relax.

First class apartments with views across the river Arno. Lot's of great restaurants nearby.