The Muiderslot is a medieval castle in the town of Muiden at the place where the river Vecht pours in the former Zuiderzee. It is near Amsterdam. The Castle, built on the site of an old toll House around 1280 by Count Floris V. He used the toll Castle to master the trade from Utrecht via the river de Vecht. The castle was not inhabited by the count itself but was entrusted to a Castellan. Floris did not enjoy the toll income of the Castle too long, he was murdered in 1296. 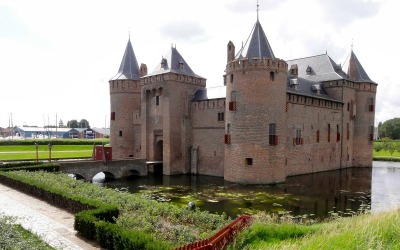 Walk into the Courtyard of the Muiderslot on Google Maps 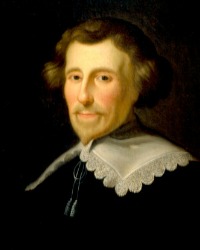 After the murder of count Floris V, the Bishop Willem van Mechelen captured the Castle and it was probably partly destroyed. With control over the Muiderslot, the Bishop guaranteed free passage over the river Vecht from Utrecht.

Almost a century later, around 1370, the castle was rebuilt on its old foundations by Count Albrecht of Bavaria ((1336-1404). Count Albrecht is the grandfather of Jacqueline, Countess of Hainaut.

In the seventeenth century the poet, drama writer and historian P.C. Hooft inhabited the Muiderslot. He made the Castle a meeting place for the Muiderkring, a group of writers, artists and scholars. Among others, Vondel and Bredero were welcome guests there.

Besides being a writer, Hooft held all kinds of public functions, including those of bailiff of Muiden and the Gooiland and sheriff of Muiden. In that role, he inhabited the Castle for 38 years. 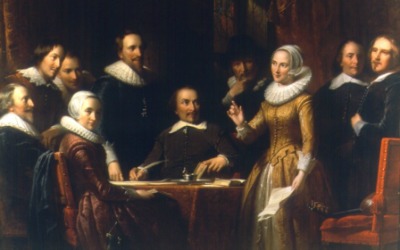 The muiderslot during the Batavian Republic

In 1795, when the Batavian Republic was declared, all officials lost their jobs. Hooft, the Castellan of the Muiderslot, also had to leave. The castle was temporarily a State prison. At the time of Napoleon, it became a weapon arsenal. From 1795 it was no longer inhabited and it became ever more a ruin. 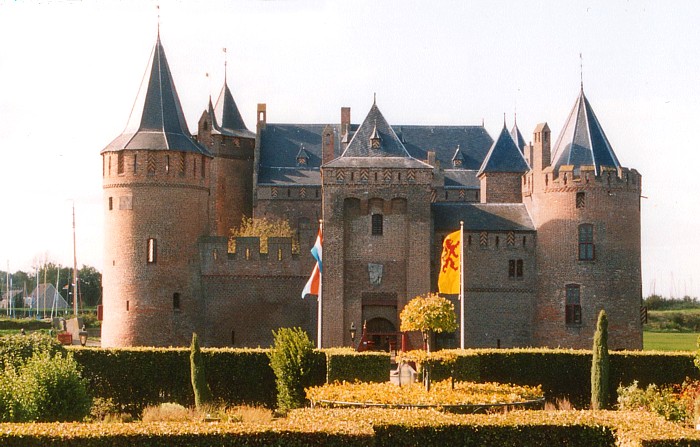 In 1825 the castle was so decayed that it was offered for sale in order to break it down.
King William I of the Netherlands (1772-1843) opposed this plan because he thought the Muiderslot was an important historical building that should be saved.

It was not until 1895 when the restoration of the castle was started by the architect Pierre Cuypers. More restorations followed Afterwards. Since 1878, the Muiderslot is a Rijksmuseum, where furniture, utensils and paintings depict the history of life in the castle in the middle ages and in the golden age.

The castle is called a "square moated castle" and is entirely surrounded by water.

On every corner is a round tower and between the two Eastern towers is the gateway, complete with drawbridge.  The surface of the castle is 32 x 35 meters. The walls of the Castle are five feet thick and under the eaves are holes made from which the enemy could be pelted. Finally, there was the moat that offered protection.

Behind the drawbridge is a large courtyard. To two walls, located to the North and west side, are residential buildings with stepped Gables. In front of the House is a courtyard garden. Outside the castle walls there is a vegetable garden and a herb garden. 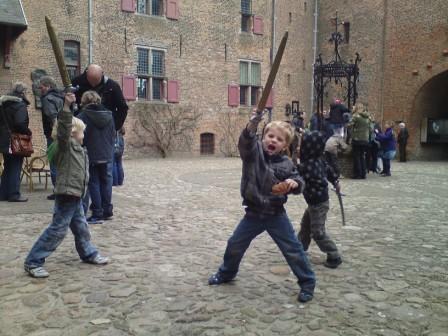 Visitors can explore the castle through three public routes, the Knight route, the Tower route and the guide route. Children can also do a quest that ends with a real ' Knight battle '.

The Knight route is focused on life in the middle ages at time of count Floris V. Children can dress up as Lady or Knight and be pictured dressed as real Knights. In the weapons room you can see swords, halberds and harnesses, and feel how heavy a sword really is. In the western tower the Floris room can be reached via eighty three stairs.

You can take a private tour around the most magnificent castles and gorgeous palaces of Holland's heartland. This tour includes the Muiderslot. It departs from Utrecht.

The Tower route places emphasis on the defense of the castle. It explains who the enemies of the Muiderslot were and how they defended the inhabitants of the castle against them.
Moreover, you have the possibility to throw stones through the opening above the bridge yourselves.

The guide route which you will take with a guide, brings you into the living areas of the Castle. The route takes about half an hour, and the guide will show you the Castle from the time of P.C.Hooft. In the Bishops' room, the lock kitchen, the Knights Hall the Princes room you will see a lot of utensils and you will hear anecdotes and proverbs that give a good picture of life in the golden age. The guide route is suitable for children over six years and is included in the entrance price.

In the summer season there is often a Falconer with real Falcons. In the time of Floris V falconry was a beloved pastime of the nobility. Other activities are often organised.

Please visit the web site of Muiderslot for actual information.

How to get to Muiden castle from Amsterdam

There are several options to get to the Muiderslot from Amsterdam.

TIP: combine the ferry and the bike route! Take the ferry back, or vice versa, you can bring you bike on the ferry for free. 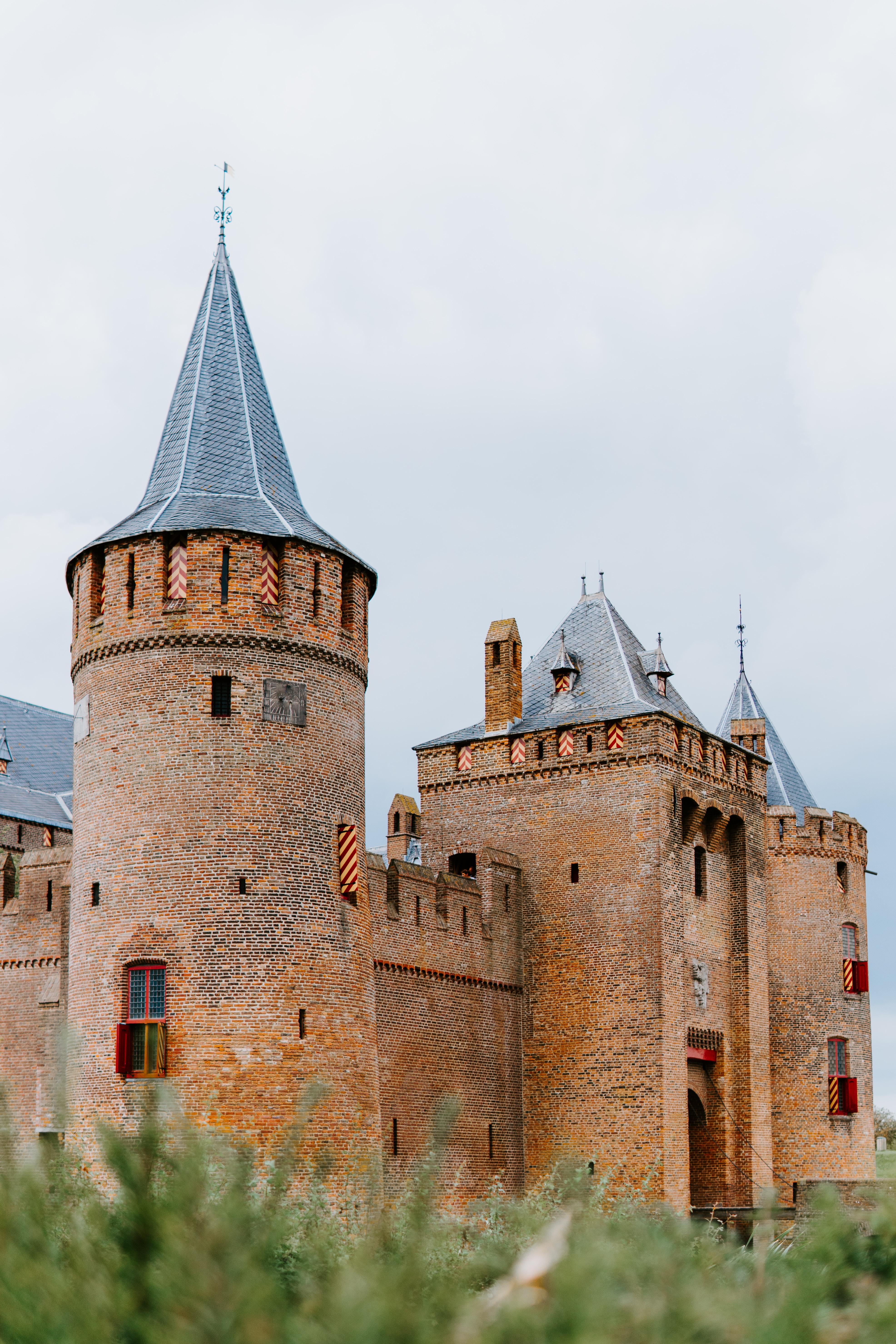