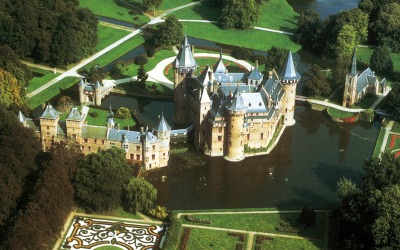 Kasteel de Haar is not a very old castle, and no royals ever lived there. But they do own the biggest copper Cookware set, even bigger than that of the Dutch royal family!

In fact, Kasteel de Haar is the biggest, most luxurious and outrageous fairy-tale castle in the Netherlands. It has 200 rooms and the park and gardens cover over 135 acres of land.

And all that for a holiday house which was (and is) used each year in September by the Baronal family van Zuylen van Nijevelt van de Haar. 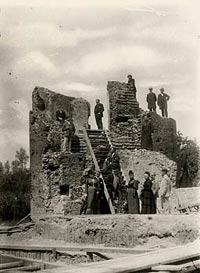 It all started in the late 19th century when the Baron Etienne van Zuylen van Nijevelt van de Haar inherited the imposing ruins of the old family castle and surrounding estate in 1890. The family van de Haar received the castle and the surrounding lands in  1391.

Baron Etienne had always been fascinated by the history of his family and his dream was to restore some of the grandeur that kasteel de Haar had around 1500.

Zuyl, or Zuil means column in Dutch. The famlily had 3 columns in their family coat of arms.

He was a noble man, but not very rich at the time.

Luckily he was able to hook the very rich Hélène de Rothschild, daughter of the famous Rothschild banking family of France. With her money and his visions they started the project to restore the old castle ruins.

The plan was to create a perfect image of the Castle as it used to be in the glory days of the van de Haar family. At the same time it had to be livable for the family, and not only livable, but luxurious and even modern for the time.

Cuypers vs. the Baroness

The couple took on the famous architect Pierre Cuypers, who is also known for designing the Rijksmuseum Amsterdam (Built between 1876–1885) and Amsterdam Central Station (1881–1889). The plan was to rebuild the castle in 2 years, but of course, like any large construction project it protracted, and eventually Pierre Cuypers would continue to work on the project for 20 years (from 1892 to 1912).

The starting point for the design were the ancient ruins of the Castle.  Cuypers loved neo-Gothic architecture, and therefore a lot of the interior of the castle does remind us of a church. The huge entrance hall used to be the castle’s courtyard, but Cuypers put a roof on top, making it the most elegant entrance hall.  Madame the baroness did not like the dark neo-Gothic style of Cuypers very much, and she ordered her rooms to be in a more romantic Louis XIV style. 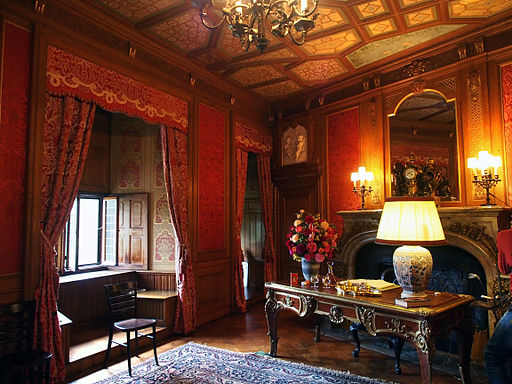 The bedroom of the Baron. Foto: By Arjandb (Own work) via Wikimedia 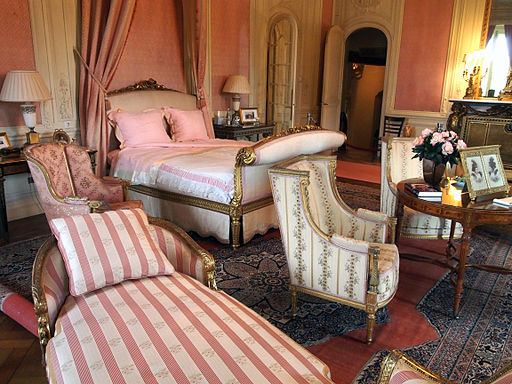 The bedroom of the Baroness. Foto: By Arjandb (Own work) via Wikimedia

The most famous and largest furniture retailers and manufacturers in the world at the time was Maple & Co from London and Maison Jansen from Paris.

Some 20 Bedrooms of Kasteel de Haar are furnished by these companies. You could order complete bedrooms with matching furniture there, very luxurious at the time.  Cuypers detested the style of these companies, but he had to follow the orders of the one who is paying his bills! 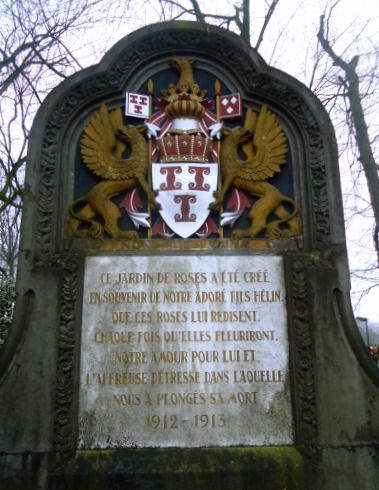 The Baronnes had another wish, to have beautiful Castle garden surrounding here Castle.

Problem was that the village of Haarzuylen was just outside the castle, so they simply decided to move the complete village!  Pierre Cuypers designed a new village for the people who lived there, and they did not mind at all. They all were moved to new houses with electricity and running water. If you have the change pay a visit to this village after you have visited the Castle, it is lovely.

Now the grounds were empty and ready to become a park. But the Baron and Baroness did not want to wait years and rears for new trees to grow, so they took trees of 40-60 years old from the Utrechtse Heuvelrug, and transported them to the Caste garden. 7000 (!) Trees were moved through the narrow streets of Utrecht, and if  necesarry, houses were bought and demolished to make place for this operation.

The accident was extra tragic because his parents both loved all that was modern and new, and therefore loved cars city-to-city races that became very popular in the first decade of the 20th century ( for who could afford is of course). The Baroness was one of the first women in Europe who could drive!

Now the castle was ready to welcome guests. The family only used the castle in September, but six months in advance the staff had to start the preparations. Famous international guests from all over the world slept in one of the 20 bedrooms. Amongst others Brigitte Bardot, Roger Moore, Gregory Peck, Maria Calles, Coco Chanel and Joan Collins were guests at the Castle.

To make sure the family and their guest had all the luxury that they were used to the Castle had central heating, electricity and plumbing, which was of course not the case in the old castle that they tried to rebuild.

The kitchen was also very modern and has a huge coal fired stove of about 6 meters long. 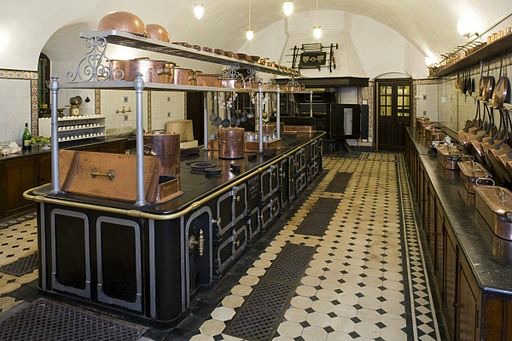 To keep all the technical installations that made these modern utilities run out of sight a little side castle was built, the Châtelet.  Since 1950 the family Van Zuylen Van Nijevelt, living abroad nowadays most of the year, uses this as a family holiday home. 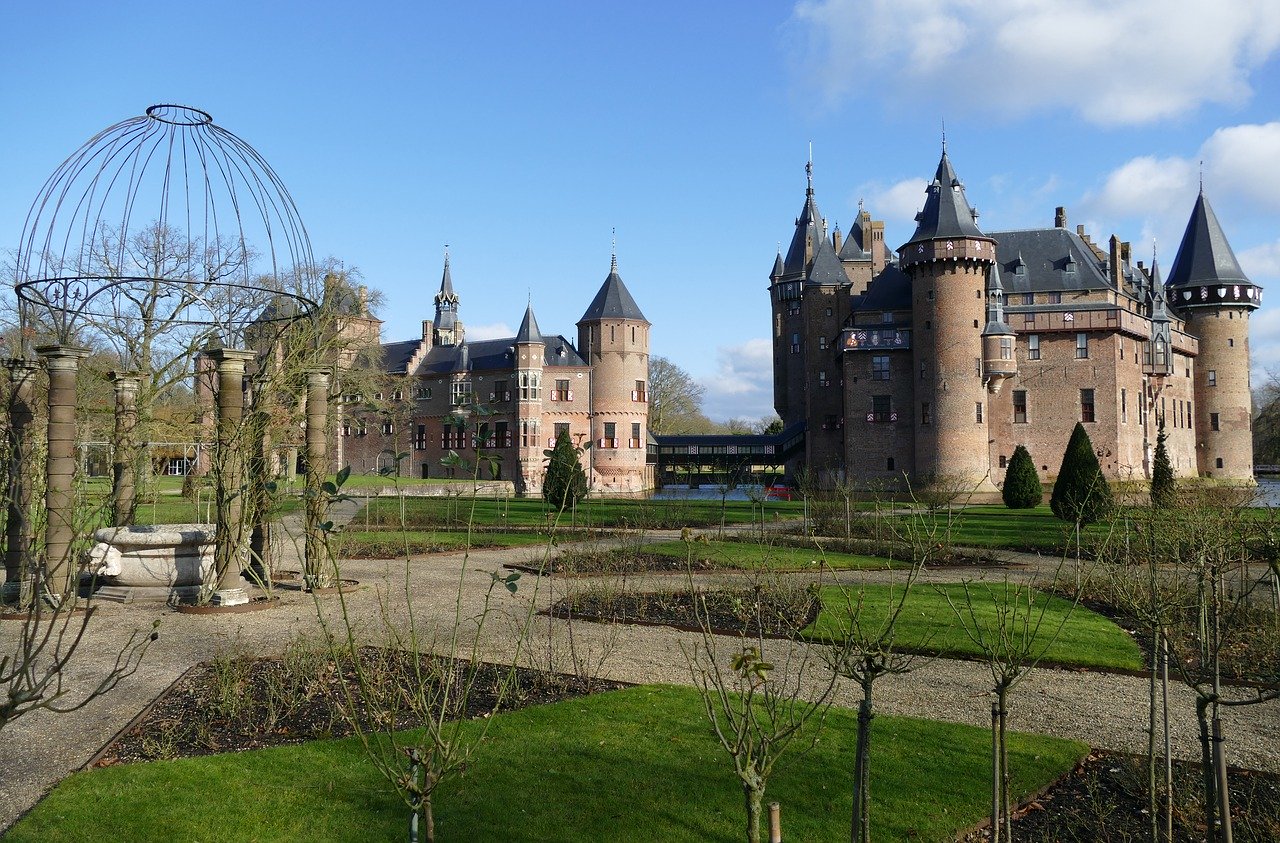 The big castle to the right, and the Chatelet to the left. They are joined by a small walkway.

I had the rare and once in a lifetime opportunity to visit the Châtelet which is also undergoing mayor renovations and is open to the public until 31 May 2015. Splendid to enjoy the smell of the old wooden floors and walls being waxed and see the bedrooms, nursery and kitchen where the baronesses used to play, and will be staying when they come over for the hollidays.

And althought the big castle is no longer owned by the family,  they do have the right to use the castle in each year in September for eternity. So you might bumb into one of the Baronesses in the park someday!

The castle can only be visited on guided tours.

See for all information on openinghours and fees the website of Kasteel de Haar.