This Romanov family tree covers the entire period of Romanov rule from the accession of the first Romanov tsar Michael I in 1613 to the last emperor Nicholas II, who was assasinated in 1917.

The reigning monarchs have a crown, obviously , and the regents wear a Tiara. Luckily these are all female!

I only mention the children that ruled at some point, or are parents to future rulers. Brothers and sisters of the tsar and Tsarina's are not mentioned in this family tree.

I added some historical features to get some context. You can read more about the timeline of the Romanovs dynasty timeline below. 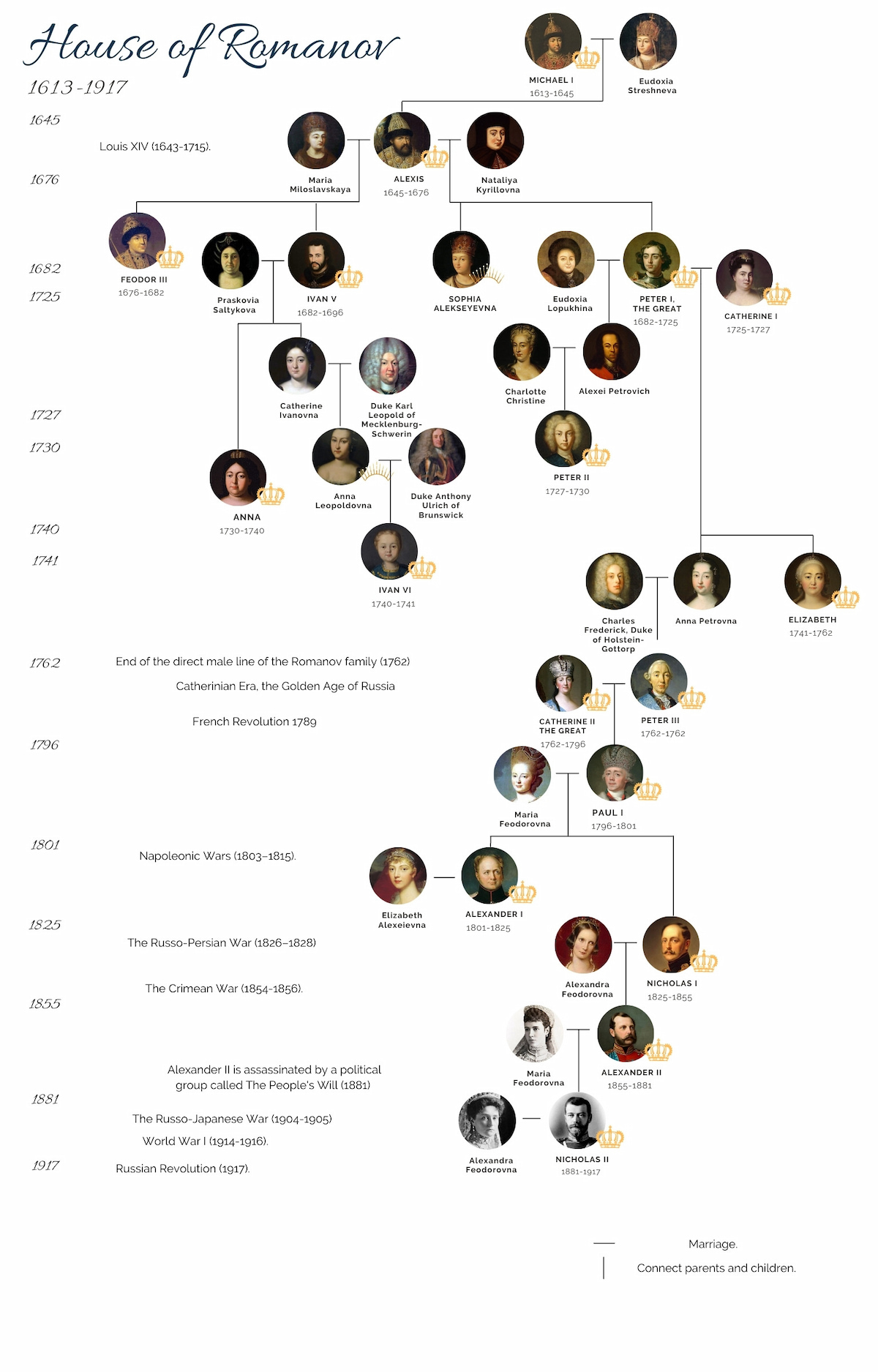 Alexei Mikhailovich becomes tsar Alexis I The Quietest at the age of 16. He is the father of 16 children, 3 become Tsars of Russia, and one daughter is regent of Russia for a while.

Alexei maries Maria Miloslavskaya (1624 – 1669) in 1648. After giving birth to thirteenth children she dies a week after the birth of the last one.  Alexis and Maria have been married for twenty-one years.

Alexis dies in 1676. His two oldest sons are already dead by then. Feodor, the third son and ninth child of Alexis and Maria succeed his father as Feodor III of Russia.

Feodor III of Russia rules from 1676 until his death on 7 May 1682. A remarkable feature of this Tsar, no beard!
Although he marries twice he has no surviving children. There is no successor to the Russian throne!

This leads to the Moscow uprising of 1682.

Two Tsars on the Russian throne, Peter the Great 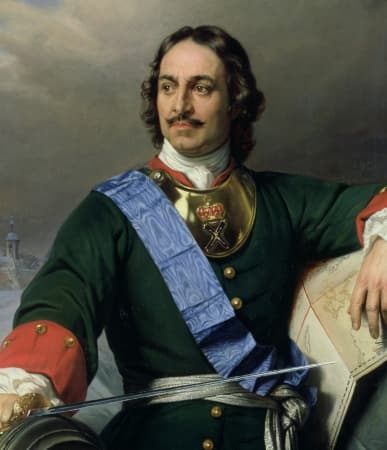 The families of the two wives of the late Tsar Aleksey fight for power. This leads to a unique new concept of voetsarstvenniki (double tsars).

Feodor's younger brother Ivan V is installed as "first" tsar and his younger half brother, the young Peter I, gets the second position. Sophia Alekseyevna, Ivan's full sister and Peter's half-sister acts as a regent for them both.

Peter was 10 and Ivan was born yesterday, so Sophia was the puppetmaster during her reign as regent of Russia from 1682 to 1689.
Ivan's reign from 1682 to 1696 was solely titular because he was seriously mentally-challenged.

In 1689, Peter, aged 17, is tired of having to share power and plans to get rid of his half-sister Sophia. He is partly successful as Sophia is forced into a convent. Now Peter's mother, Natalya Naryshkina, rules as regent because Peter is not mature yet. And he still had Ivan as a co-ruler.

He has to wait 5 more years until Natalya dies in 1694 to become an independent ruler. When Tsar Ivan dies in 1696 he becomes finally becomes the sole Tsar. Peter is 24 and will rule for forty-two years until his death at age fifty-two. He is better known under the name Peter the Great. Not only his reign and empire were great, he was very tall himself. He measures 2,03 m as an adult which was very big in those days.

Peter's mother picks his first wife  Eudoxia Lopukhina (1689-1698), and they get married in 1689. It proofs to be a mismatch, but they do manage to have three children before Peter divorces her and sends her to a convent in 1698.
Already since 1691 Peter rather spends his time with his Mistress Anna Mons, a German commoner with which Peter had much more in common. Their relation would last for 12 years. 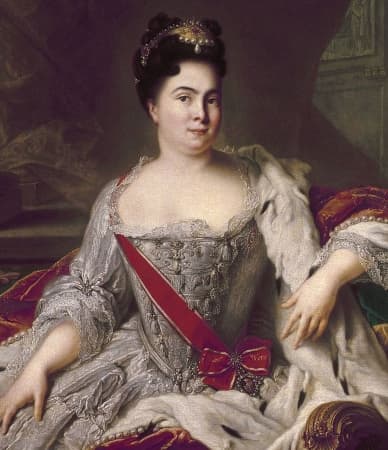 The second wife of Peter he found on his own. Martha Skavronskaya ​was also Peter's mistress. She was a Polish-Lithuanian peasant which you may know as Catherine, as that was the name she took when she converted to the Russian Orthodox Church. Peter and Catherine were officially married in 1712, 10 years after the start of their relationship. They already had 5 children. They might have been married earlier, but no record of that exists.

Catherine gave birth to 6 more, making a total of eleven children for Peter and Catherine. Most of these children die in infancy or very young.

Alexei Petrovich, Peter's son by Eudoxia, is the only surviving Tsarevich of Russia and heir to the throne. Alexei and his father are like dogs and cats, they load each other. After Alexei defects to Austria for a while, Peter is finished with him. Alexei is imprisoned in the Peter and Paul fortress and after questioning succumbs to torture in 1718. He is 28 years old.

Again, there is no male son and heir left when Peter dies in 1725. Peter's grandson, Peter Alexeyevich, the son of Alexei, is only 10 years old and has no powerful allies. Those in power declare Peter the Great's wife Catherine Empress regnant of Russia. From illiterate servant to the empress of Russia, that is an admirable career!

Catherine I only reigns for two years until her death in 1727.

The end of the male Romanov Line of descent

Now Peter Alexeyevich is still only 11, but there are not many other options left. He is crowned Emperor Peter II. Do you remember Eudoxia Lopukhina who was put in a convent by her husband Peter the Great? She is still alive and brought back to court to live with her grandson.

Of course, Peter II is much too young to rule and is influenced by others that rule in his name. The court is moved back from St. Petersburg to Moscow. Peter does not grow up to rule in his own right. He dies young, at the age of 14. He is not married yet and has no issue. The direct male line of descent of the Romanov dynasty dies with him.

Again the question is raised, who will be the next ruler of Russia? There are no male Romanovs left, so it comes down to the following five female candidates Catherine (born 1691), Anna (born 1693) and Praskovya (born 1694), daughters of Ivan V, Anna (born 1708) and Elizabeth (born 1709) daughters of Peter the Great.

The Supreme Privy Council selects the oldest Anna as the winner and she becomes Empress Anna of Russia. Anne is already a widow then, and she never remarries. Of course, that causes yet another struggle over the succession when Anna dies in 1740 at age 47. She names her grandnephew, Ivan VI, as her successor. He is the two months old grandson of Tsar Ivan V.  Thirteen months later Elizabeth Petrovna, the daughter of Tsar Peter the Great, seizes power. Ivan V is imprisoned and stays that way until his death 22 years later. 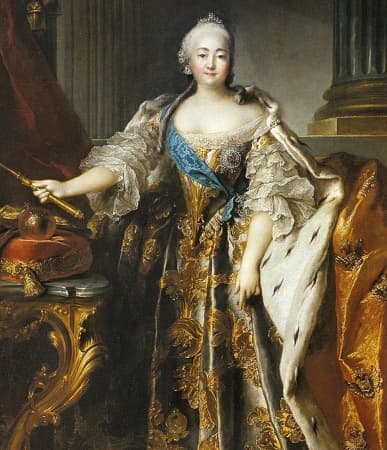 Empress Elizabeth of Russia reigns the next twenty years. She never gets married.

When her father was still alive, he had a hard time finding suitable marriage material for her. The royal bachelors in Europe did not want to marry a servant's daughter. The German prince that he eventually found willing to accept Elizabeth's hand died before the marriage could take place.

Once Elizabeth became empress it became completely impossible to find a suitable husband. A nobleman does not want to marry a woman of higher rank. If she married a subordinate commoner, she might forfeit her rights to the throne. So Elizabeth remains single, although she has many lovers.

To have a successor Elizabeth fetches Peter, the 14-year-old son of her sister from Germany and has him live with her in Russia. Raised in Germany this Peter hardly speaks Russian and he will remain pro-Prussian all his life. 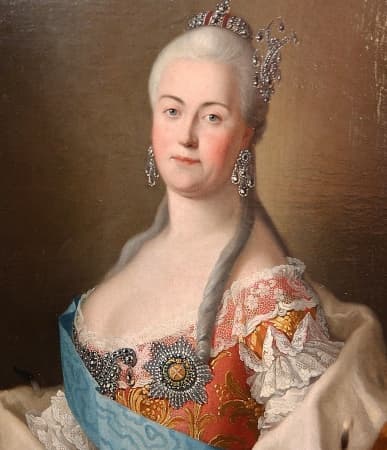 Elizabeth also finds a wife for him, another German raised Princess. Her name is Princess Sophie Friederike Auguste von Anhalt-Zerbst-Dornburg, but she changes it to Yekaterina or Catherine. She understands better how to prosper in Russia, and becomes a real Russian.

While Peter plays with his German soldiers, Catherine endears herself to the Russian army. When Elizabeth dies in 1762, Peter is crowned as Emperor Peter III. Supported by Russian soldiers, his wife Catherine commits a coup barely six months later. Peter is forced to resign and dies under mysterious circumstances a few days later.

During these events, Ivan VI, who has been imprisoned since he was 6 months old, makes an escape attempt. He doesn't survive this either, he is killed during the attempt.

Now that her rivals have been eliminated the German Catherine is crowned Catherine II of Russia. She rules Russia for 34 years and will become better known as Catherine the Great.

The Romanovs of the 19th century 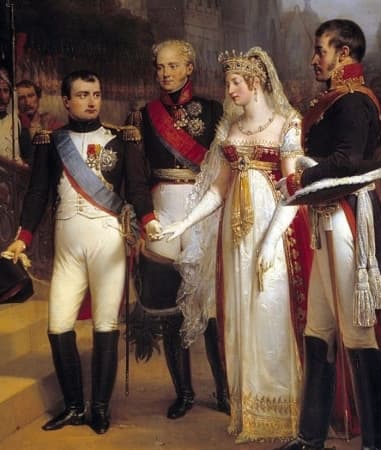 Napoleon (left) and Emperor Alexander I (the curly blonde next to him) meet the king and queen of Prussia for the signing of the peace treaty at Tilsit, 1807

Catherine has four surviving children. The first 3 were conceived during Peter's lifetime, but it is doubtful whether he was the real father. Her 4th daughter was not born until 1775 and therefore unquestionably fathered by one of Catherine's lovers.

First-born son Paul Petrovich is crowned emperor of Russia in 1796 upon the death of his mother as Paul I. Paul's first wife Natalia Alexeievna dies in childbirth. He has 10 children with his second wife Maria Feodorovna.

Catherine would have preferred her grandson Alexander to succeed her. It does not take long for her wish to be fulfilled. Paul I is murdered in his 4th regnal year by a group of disaffected Russian officers.

The eldest son succeeds Paul as Alexander I. Alexander was brought up by Catherina, as she preferred him over her son Paul. He is well known for turning Napoleon's invasion of Russia into a disaster and taking part in the coalition that brought Napoleon down in 1815.

At the age of 15, Alexander married 14-year-old Elisabeth Alexeevna. From this marriage, 2 daughters were born, and in addition, Alexander had the usual bastard children. But again no legal son to take over the sceptre!

Upon Alexander's death his brother Nicolas, much to his surprise, becomes the new emperor. As the third son, he was not raised as heir apparent. But when Alexander suddenly dies and his brother Constantine refuses the throne, it is his turn.

Nicholas Pavlovich is married to Grand Duchess Alexandra Fyodorovna and they have 10 children. For a while there, things are going as they should. The firstborn is a son! When Nicholas dies (of natural causes so it seems!) after 30 years of reign, his son succeeds him as Alexander II of Russia,

This Tsar Alexander II is also known as Alexander the Liberator because he brought an end to the serfdom which had been common throughout the Russian Empire for centuries. Alexander's wife is Maria Alexandrovna and they have six (what a wealth!) sons and two daughters.

Alexander III, the second son, becomes emperor when his father was murdered. He and his wife Maria Fyodorovna have six children. The oldest son becomes the last Romanov Emperor Nicholas II of Russia. Nicolas is engaged to Alexandra Feodorovna (Alix of Hesse) when his father dies in 1894 and they quickly get married.

The story of Nicholas and Alexandra Romanov are well known. After four daughters they finally have the much-desired son. The fact that Tsarevich Alexei Nikolaevich has haemophilia, a condition that affects many royal families in Europe in the 19th and 20th centuries, is kept secret. The reign needs to have a strong and healthy heir.

It is not haemophilia that kills the last Tsarevich though. The Russian revolution came first.

On July 17, 1918, 13-year-old Alexei, together with his sisters and parents, is killed by the Bolshevik secret police. His father, Nicholas II already abdicated on 2 March 1917. He did not want to leave the throne to his sick child, so he named his brother, Grand Duke Michael, as the next Emperor of all Russias. Michael kindly refused for the honour, ending three centuries of Romanov rule. 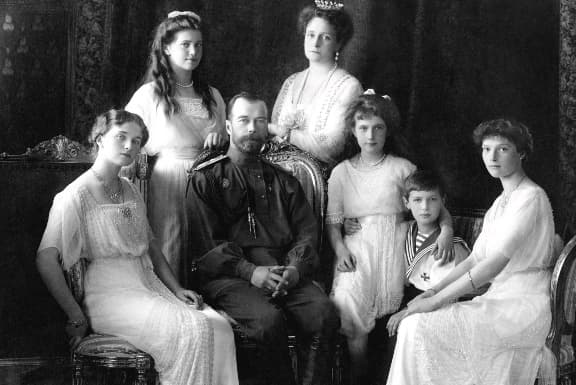 Nicholas II of Russia with his family in 1913