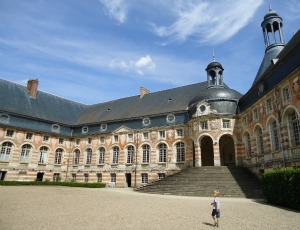 Saint Fargeau Castle is situated between the Loire and the Yonne river in the small historic town of Saint Fargeau. It stands out because of the unusual pentagonal shape. Surrounded by a beautifull park and a lovely town it is a place well woth a visit.

The castle was built in the 10th century, like so many palaces it started our as a hunting lodge. In the 13th century the pentagonal shaped Castle was finished.

Saint Fargeau Castle is where Anne-Marie-Louise D'Orleans, cousin of Louis XIV, went when she was banished from court.

Practical information on visiting the Saint Fargeau Castle you can find here.

The Grande-Mademoiselle at Saint Fargeau Castle 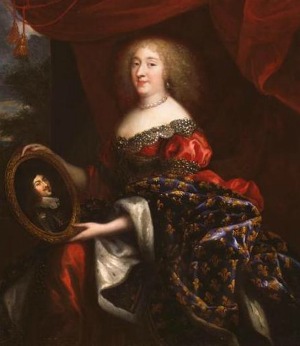 Anne-Marie-Louise D'Orleans had betrayed the young Monarch in 1652 because she choose the wrong side during the Fronde conflict. At the court of Versailles she was known as the Grande-Mademoiselle.

She was the cousin of Louis XIV (her father Gaston of Orleans was the younger brother of King Louis XIII).

After the Fronde conflict the Grande Mademoiselle was banished from court by the Queen Regent Anne of Austria and her first Minister Cardinal Mazarin. She would have had sympathy for the opposition of feudal aristocracy against increasing power of the royal government and the towering taxes that were levied by the Crown. Louis XIV was still only 14 years old at the time. The real power of the throne in that period of time was with Cardinal Mazarin.

The grande Mademoiselle lived at Saint-Fargeau Castle for 5 years. In this period she ordered the architect Francois Le Vau to renovate and improve the castle so it would be suitable for her to live in.

When she was allowed to return to Versailles she still went back to her beloved castle of Saint Fargeau regularly.

The discovery of Jean-Baptiste Lully

Anne-Marie-Louise d'Orleans had a scullery boy and Italian teacher at her service by the name of Jean-Baptiste Lully. She helped him develop his talents and when she returned to the courts of Louis XIV she took him with her. He became the most important composer for the French King. He composed many ballets and other music that pleased the king highly and he was the founder of French Opera. When you visit the gardens of Versailles Palace you will often hear his music playing.

Unfortunately a fire in 1752 and a second one in 1855 ruined almost all of the castle. All royal symbols and coats of arms were removed from the facade of the palace during the French Revolution.

Although it is a small castle there are a few reasons to visit Saint Fargeau Castle.

Practical information on visiting the Saint Fargeau Castle you can find here.