Life in Versailles Palace seems luxurious; the royal family had the best doctors at their disposal, swapped clothes several times a day and ate the most exclusive dishes. The king kept several mistresses on after, had a lot of children and lived in a beautiful palace with proverbial spacious gardens.

If we take a closer look to life in Versailles Palace we find some downsides.

Although surrounded by luxury the Royal Family had no privacy whatsoever and were always surrounded by people who needed their attention. The aristocrats that lived there had to settle for bad housing with no form of sanitation. Cold in Winter and hot in Summer, it was no pleasant environment. 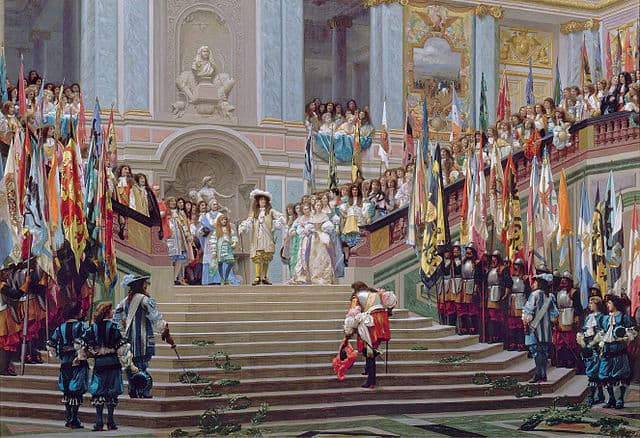 Reception of Le Grand Condé by Louis XIV at Versailles in 1674, BY Jean-Léon Gérôme

Eyewitnesses to the court of Versailles

Life in Versailles Palace must have been difficult for all inhabitants.

The Sun King got very old for his time, almost 77 years, but was plagued by diseases (kidney stones and gout). When pulling a molar a large part of the upper jaw came with it, and they feared for his life after this operation.

Medicine at the time was a leading cause of death. A popular medicine during that time was the heavy toxic calomel, mercury (II)-chloride. Also, the use of bloodletting and leeches were popular medical interventions. All surgery was done without anaesthesia.

Many people, even the nobility, died of diseases that we now can easily deal with.
The only reason that Louis XV survived during the smallpox epidemic that killed his parents and his older brother was the fact that his governess Madame de Ventadour, hid him in his room and would not let the doctors in for 3 days.

His older brother died, not only of measles but also from blood loss, caused by the treatment of the court physicians!

Most courtiers stayed in small dark rooms without any form of sanitation. The better apartments were reserved for the kings' family, close friends, mistresses and (illegitimate) children.

People were covered with lice and fleas. Taking a bath was considered to be dangerous (which was true most of the times since water was a great source of bacteria).

People covered themselves with perfume and wore a fur around the neck to seduce the pests to crawl there instead of on their heads. There was very little sanitation. People urinated in the hallways and the courtyards were used as latrines. The smell must have been horrible!

Especially during the reign of King Louis XIV when the Palace of Versailles was still under construction, there was always noise and dust. And, for all residents, it was just very crowded. At the time of the reign of Louis XIV between 3,000 and 10,000 people were living at the Versailles Palace. Pests like mice and rats outnumbered the human population many times. 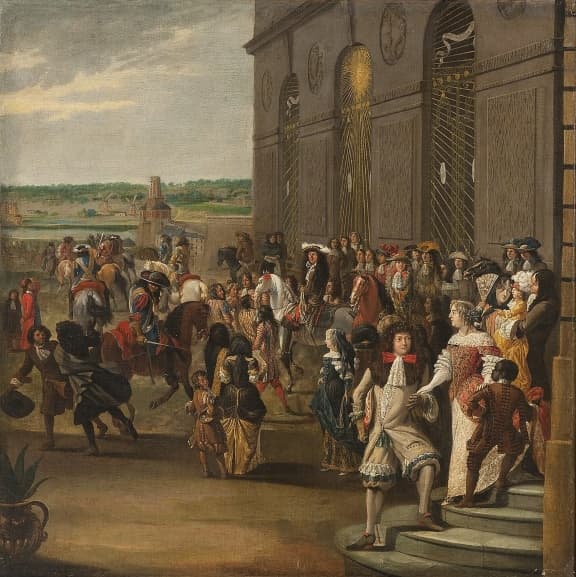 Louis XIV in the gardens of Versailles surrounded by members of the court.

The family of the King lived there, officiously. King Louis XIV died in 1715, at the age of sixty-seven, very old in that period of time. He had been King of France for seventy-two years! In his lifetime he produced a lot of offspring.

He had six children from Queen Maria Theresia (only one would grow up to be an adult). He also had numerous illegitimate children with various women. Most of them were legitimised by the king and for those who grew up he arranged marriages into the aristocracy.

The male descendants of the king, also the illegitimate ones, and their families kept living at the Palace. The daughters were usually married off to foreign royalty and left, often at a very young age. For example, Marie Louise Elisabeth, eldest daughter of Louis XV, married on her 12th with the son of the Spanish King Philip of Bourbon. Unmarried daughters, and also cousins and other family members lived at the Palace.

King Louis XV had 11 children with Queen Marie Leszczyńska. 4 Of his daughters never got married, and remained at court. They had their own apartments, which you can visit (see Tips for visiting Versailles).

In addition to the family of the King, it was not unusual that the Mistress(es) of the King occupied an apartment in the Palace, often with her children. 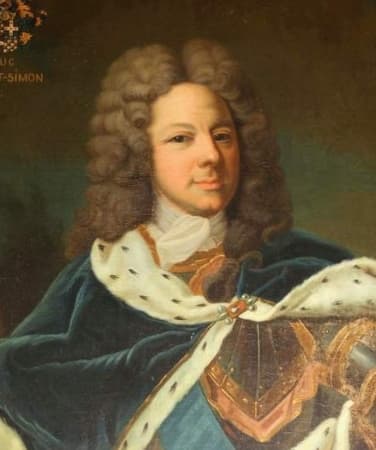 There were also many members of the aristocracy living in the Palace. The Sun King wanted this nobility to live close around him have so he could keep an eye on everything and everyone. All these people had their own servants living with them.

The Palace, particularly the State apartments, was a public space. It was coming and going of visitors throughout the day. Curious people, foreign diplomats, visitors of all ranks and positions tried to catch a glimpse of the King and hoped for a personal meeting or conversation.

The King was never alone. When he got up in the morning, there were courtiers around his bed ready to take off his nightgown and to help him dress. It was only allowed to those with the highest rank to get behind the balustrade in the bedroom to come and to perform these tasks.

In the room were dozens of people present each morning.  Outside the room hundreds of courtiers were already waiting to try to exchange a quick word with the King. His Chamberlain slept at the feet end of His Majesty’s bed. Even if the King sat on his toilet people came to speak to him!

That the courtiers found the King in his bed every morning does not mean that he spent the whole night there. The Chamberlain was often the only one who slept there. Even though the King often spent the night elsewhere in the Palace, even if he had already been hunting in the morning, the protocol forced him to ´awaken´ at 8 a.m. in his own bed to perform the levée ceremony.

The queen could neither escape all the people who surrounded her day and night. She also woke up surrounded by people who helped her with her morning toilette, and in the meantime would ask for small or big favours. 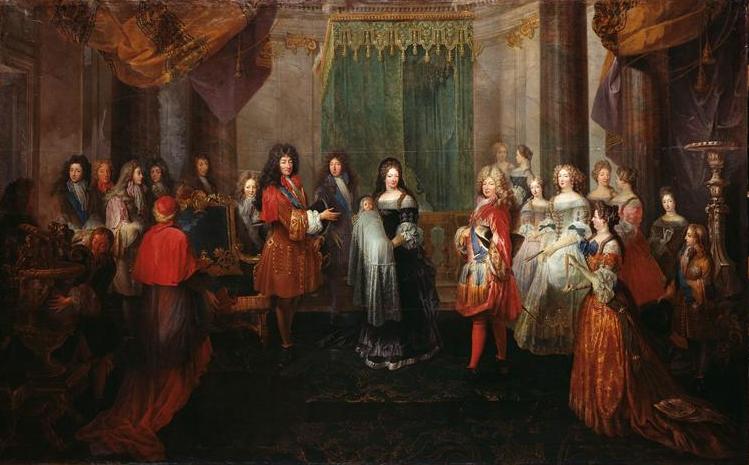 Even when giving birth to her children the bedroom of the queen was packed with people.

They all wanted to witness the birth, to see if the child really was the queen’s. They wanted to know if no children were interchanged; stillbirths for living children, girls for boys.

It is understandable that Marie Antoinette preferred to spend her time in the Petit Trianon and its domain. There was less strict etiquette, and more importantly, there were a fewer people!

Every inhabitant of Versailles was aware of his rank. This was necessary because the most normal daily affairs were affected by the rank you held.

From the levée (rising) in the morning until the Coucher (retirement) in the evening, the days and activities of the royals at Versailles were strictly planned. For each activity the roles of the other courtiers were described and precisely defined the place in the hierarchy of each person.

The closest to the king were those who were allowed behind the gate surrounding the king's bed. The highest-ranking nobleman in the room would hand the king his shirt, the next one his coat and so on. This rather intimate ceremony in the king's bedroom, the Petit Lever, was followed by the Grande Lever. The king would leave his bedroom into the state apartments, where a crowd was waiting to get a glimpse of him.

Both the King and Queen had to endure these ceremonies every morning and evening. Whenever they could they would retreat to the small apartments or to other palaces or houses. Here they could be among family and favourites, as a lot of courtiers had no access to these places.

Not everyone was allowed to sit in the presence of a member of the royal family, and if you had that right. you had to know the kind of chair you were allowed to sit on. If someone of higher rank entered the room, you had to stand up. Maybe you could change to a simpler seat or you simply had to stay on your feet, depending on the new person's rank.

In the presence of the king and queen, no one was allowed to sit on a  fauteuil (armchair), unless you were a visiting monarch. 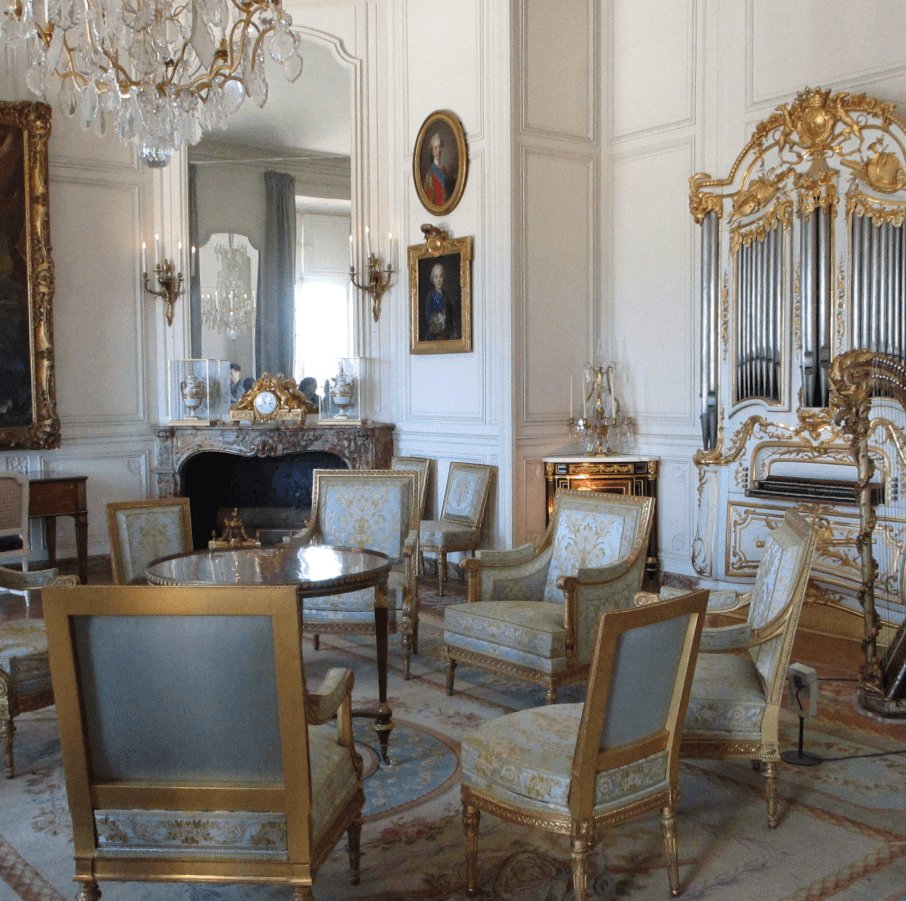 The direct family of the king, his siblings and children, could sit on a chair with a back but no arms. 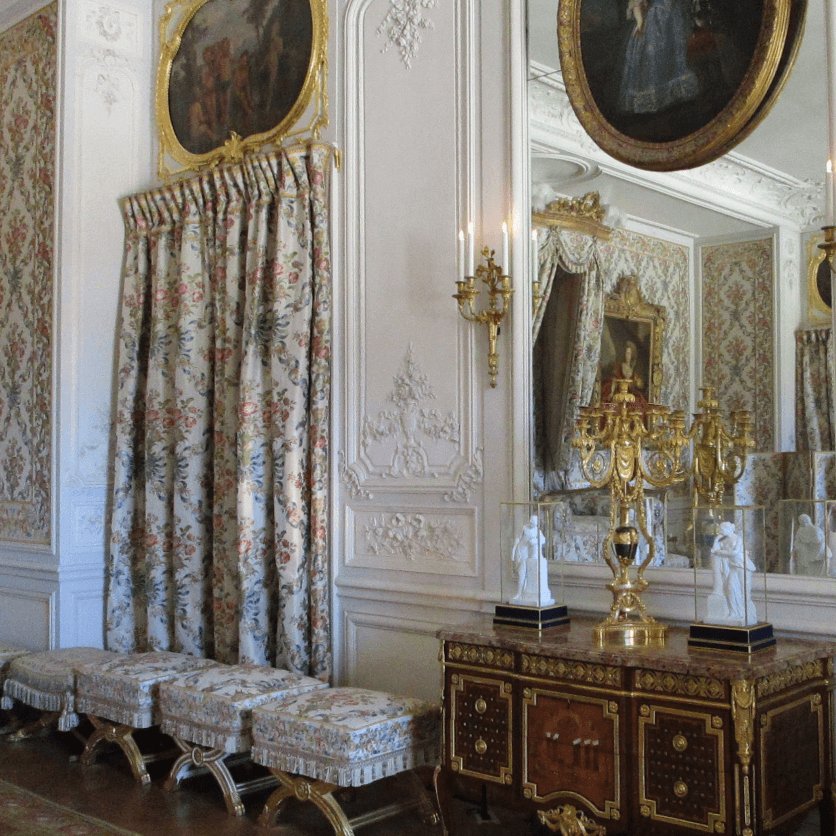 Duchesses could sit on a tabouret, a padded stool. All other people were expected to stand in the presence of the monarch. 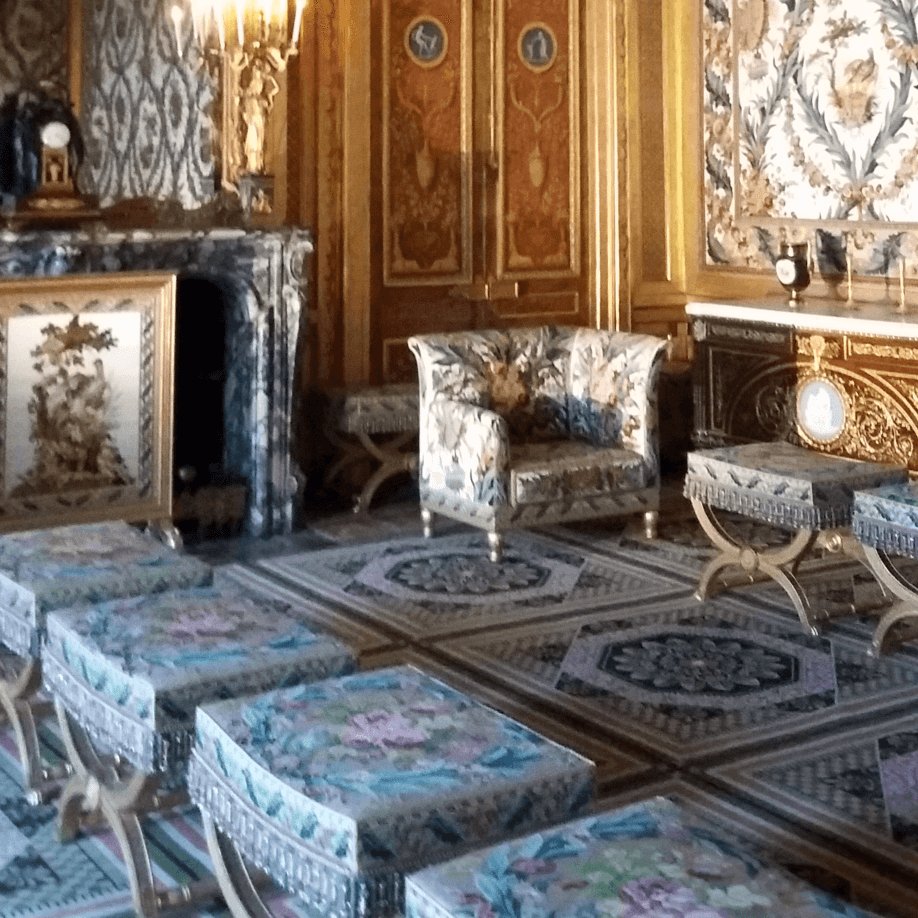 All other courtiers that found themselves in the presence of the King had to keep standing up.

What is the use of so many armchairs in one room, you wonder? The rules changed whenever someone entered or left the room. If the King left the room, suddenly the Cardinal was allowed to sit on a simple chair. If the Queen left the room too, the Dauphin and his brothers and sisters had the right to a fauteuil, and the armless chairs went to the grandchildren, princesses, duchesses and cardinals.

Dukes could only sit (on a tabouret) in the presence of the king's grandchildren.  And of course if there were no members of the royal family in the room, everyone could finally sit down.   Ladies would have special servants who carried their seats around, just for an occasion like this.

King Louis also introduced many dress codes in Versailles. He was the first to wear red high heels (both men and women wore high heels) and he declared that only his favourites were allowed the privilege of having red heels on their shoes. This was a perfect way to show off your close relations with the king! 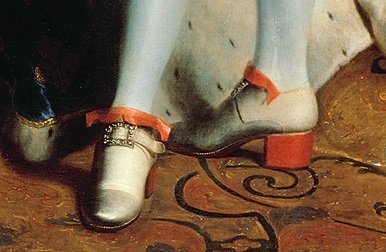 When you wanted to visit the 'Grand Couvert' (watching the royals eating diner), the men had to wear a sword. At the entrance of Versailles you could rent them if you did not have one!  For each circumstance you had to dress properly.

Men were required to wear a  an extravagant coat, made from velvet, satin or silk called a habit habillé. The women had to wear a grand habit de cour, which was an embroidered gown leaving the shoulders bare.

The pressure to keep up with fashion brought the nobles in debts, and that is exactly were the king wanted them. They could not threaten his authority when they were bankrupt from spending all their money on the tailor, wigmaker, barber, jeweller, perfumer, and shoemaker.

You could not just start a conversation with a higher-ranked person, they had to address you first.  This is the problem that Madame du Berry faces when Marie Antoinette comes to court. She cannot talk to her before Marie Antoinette first said something to her.  In the movie Marie Antoinette the predicament is shown extensively. Madame du Barry and the King, are ecstatic when the Dauphine finally makes a small remark to her.

During the evening entertainment gatherings in the Grand Apartment this rule does not apply. However,  the person of higher rank has the right to totally ignore the person talking to him or her.

There were numerous other rules to be aware of. Nevertheless, to occupy an apartment or room in the Palace was very popular. 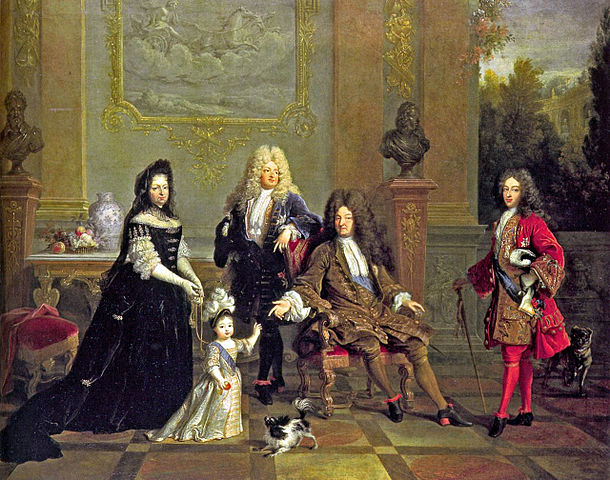