The Marie Antoinette Barbie was manufactured by Mattel in 2005 as part of the  Women of Royalty™ Series. 2 Other famous royal ladies complete this series, Queen Elizabeth I and Empress Josephine.

Mattel made more royalty inspired Limited Edition Barbie® dolls. The dolls depict real historic figures, like Empress Elisabeth of Austria, or are inspired by an particular era or event. These Barbie dolls are real collector's items and prices can go through the roof.

Here is a list of Royal Barbies and information on how to get a hold of them for your own collection. I know I will be checking my credit card balance today... 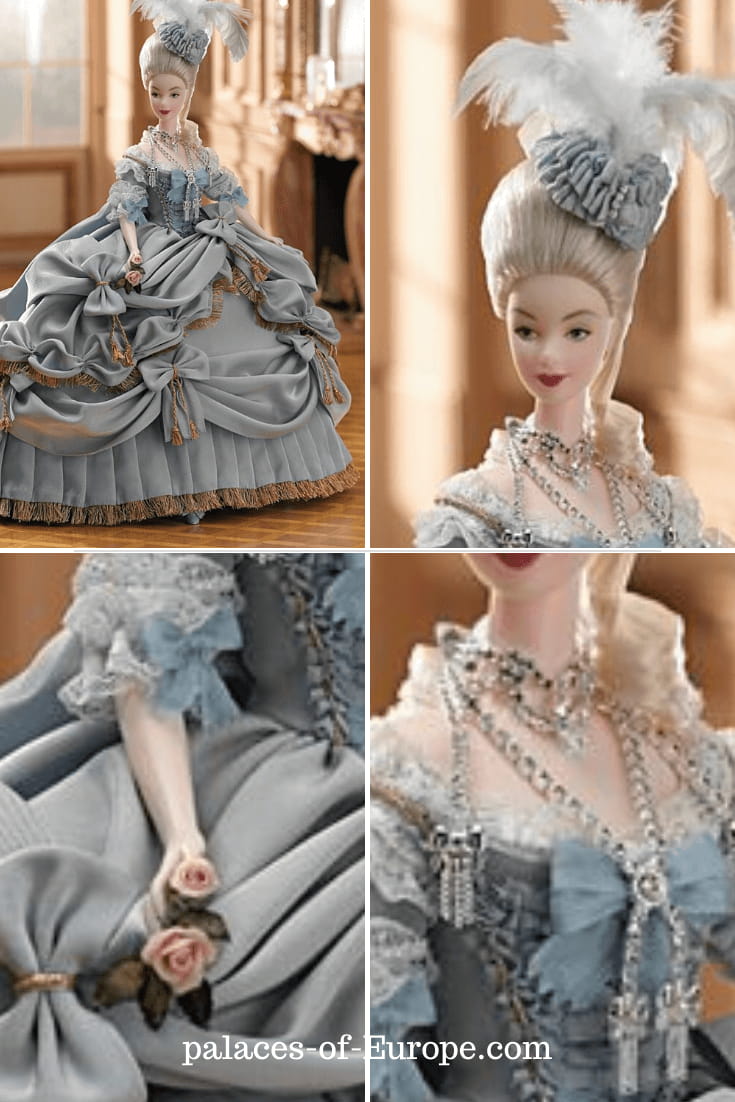 The Marie Antoinette Barbie wears a gorgeous pale blue court dress with golden fringe and a huge feathered hat. The doll is clearly inspired by the painting that Élisabeth Vigée-Lebrun made of Marie Antoinette in 1778 and 1779.

It is a bit sloppy of Mattel that she is wearing that infamous diamond necklace that caused such a scandal. Marie Antoinette never owned that necklace and certainly did never wear it.

The Marie Antoinette Barbie is one of the most expensive Barbie dolls out there.

Inspiration for the  Marie Antoinette Barbie, paintings by Élisabeth Vigée-Lebrun 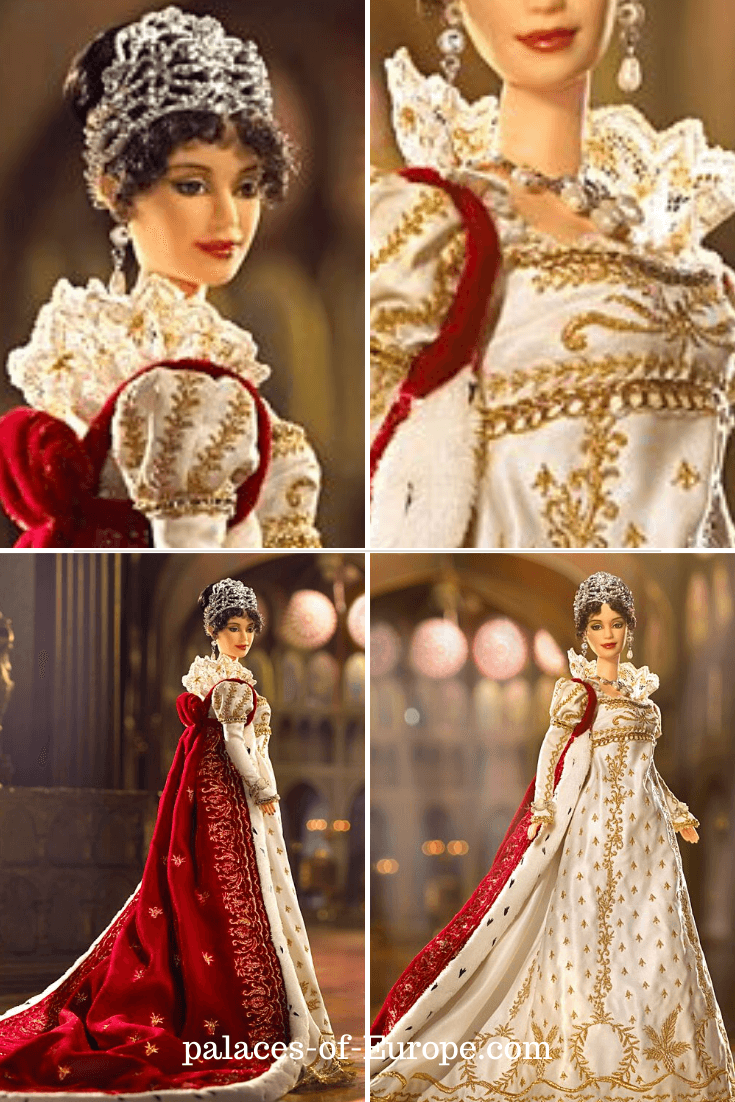 Empress Josephine wears a satin empire-style gown. The outfit resembles the one Josephine wears in the famous painting 'The Coronation of Napoleon' by Jacques-Louis David. Complete with embroidered  red velvet robe and silvery tiara.

Only 4,500 dolls were produced worldwide.

On Ebay you can find Empress Josephine Barbie Dolls between $650 and $1000. On Amazon only one doll is offered for $799.99 at the moment I am writing this. 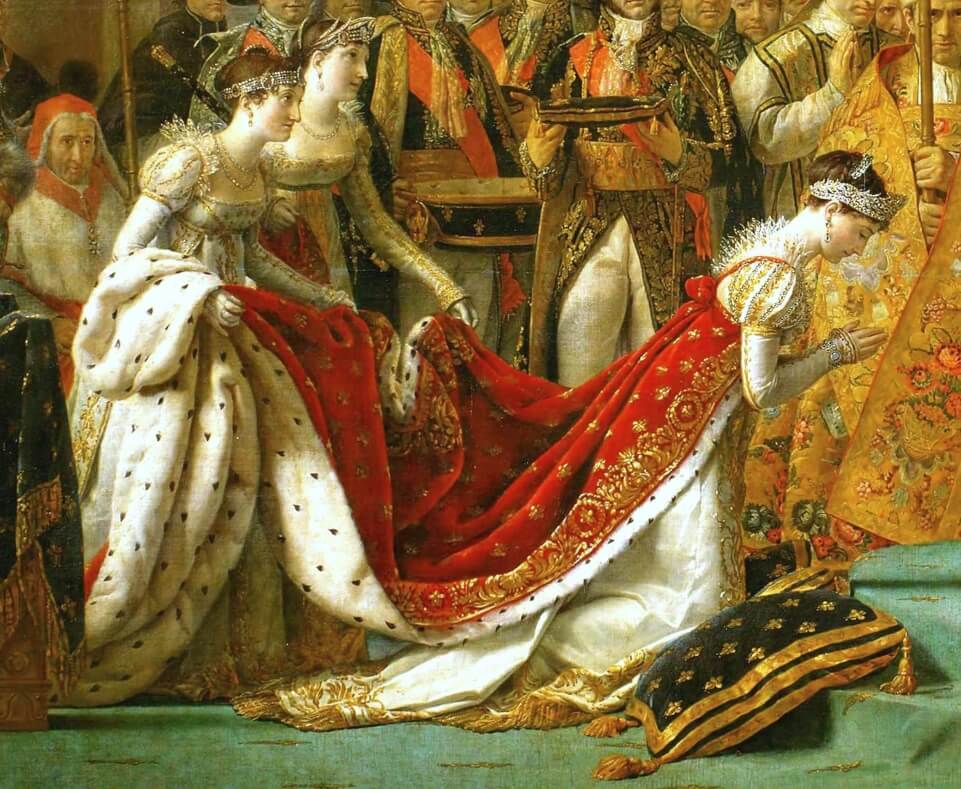 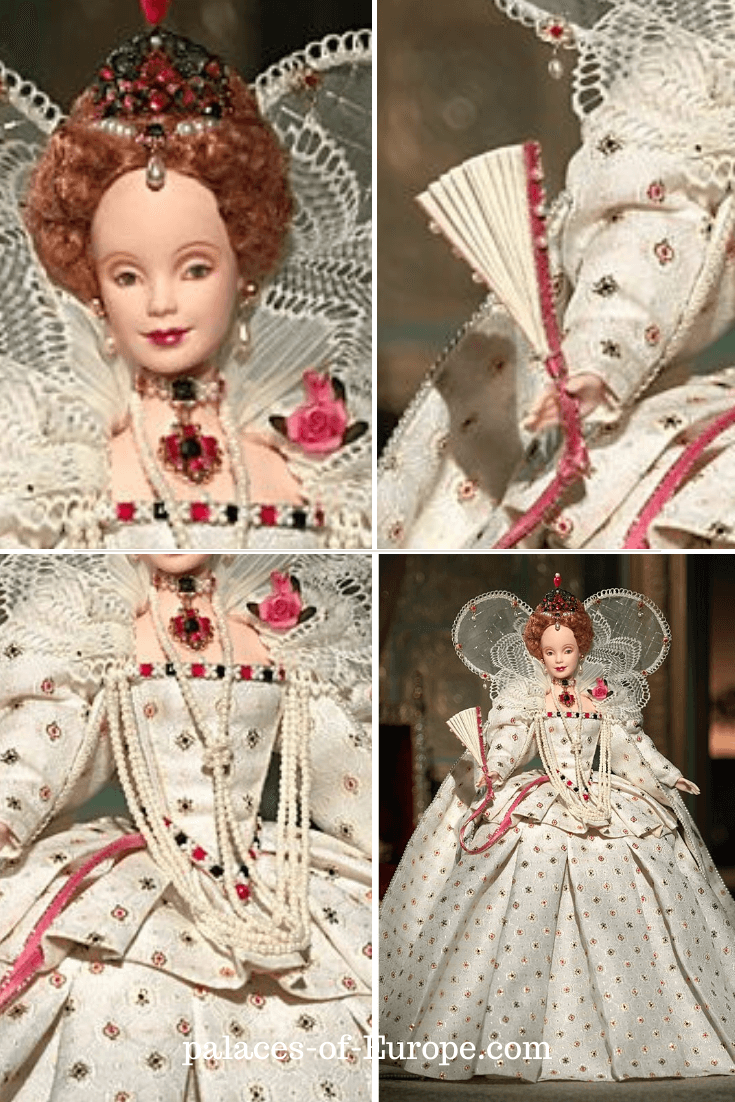 She wears an opulent dress covered with pearls and other precious stones.

The gold ornaments on the white satin held pearls, rubies and sapphires.

Her huge necklace also consists of pearls. Like the original Queen,  Barbie is holding a Chinese fan attached to the waist girdle by a coral-coloured ribband.

You can find the Queen Elizabeth I Barbie on Ebay from $389.99 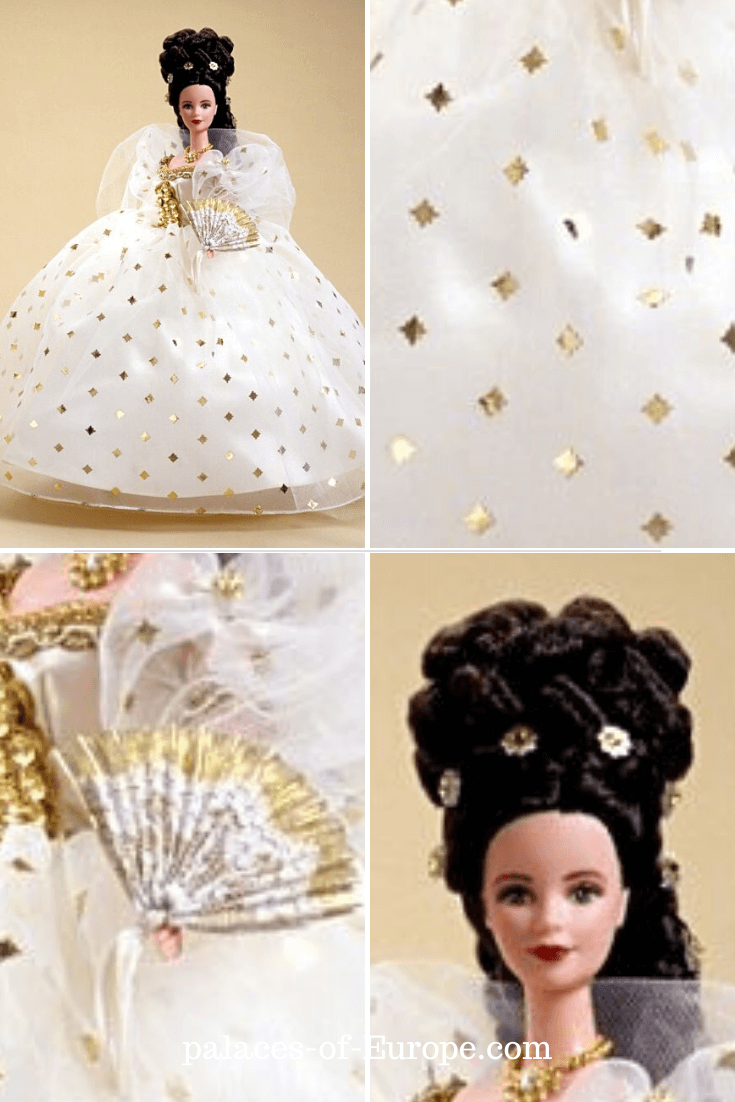 In my humble opinion, Mattel missed some points in this Limited Edition Barbie, inspired by Empress Elisabeth of Austria. Starting with the name Sissy, as the Empress nickname was Sisi. And what about that outrageous big hair?! It wouldn't look out of place on a Marie Antoinette doll but is not the style of Empress Sisi.

The dress that the Sissy Barbie wears was originally designed by Worth. She wears it on the famous painting that Winterhalter made of her in 1865. The white satin evening dress is covered with silver foil stars. The silver stars also cover her hair.

The Empress Sissy Barbie does not look as sophisticated as the royal Barbies above. This also means you can get her cheap! Especially when you compare it with the  Marie Antoinette Barbie. Available on Ebay and Amazon for as low as $50! If you look for 'Empress Sisi Barbie' you will get more results. 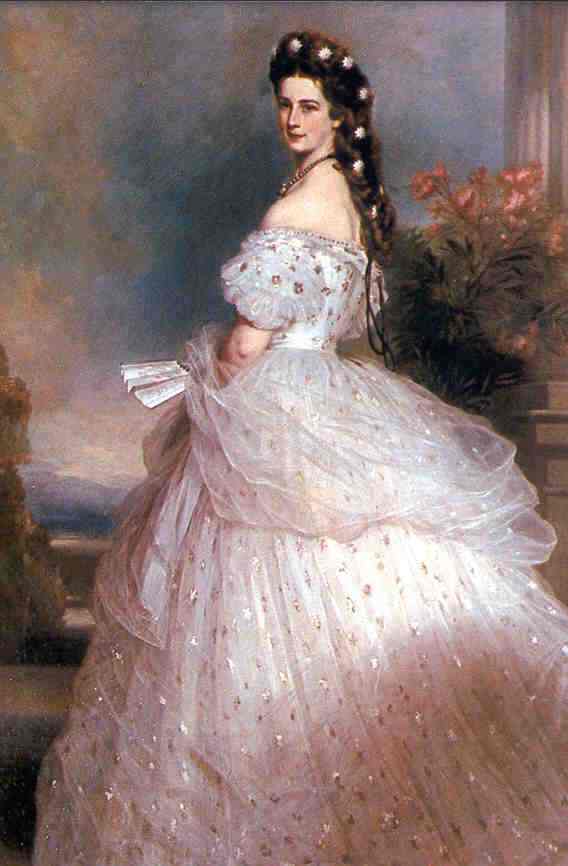 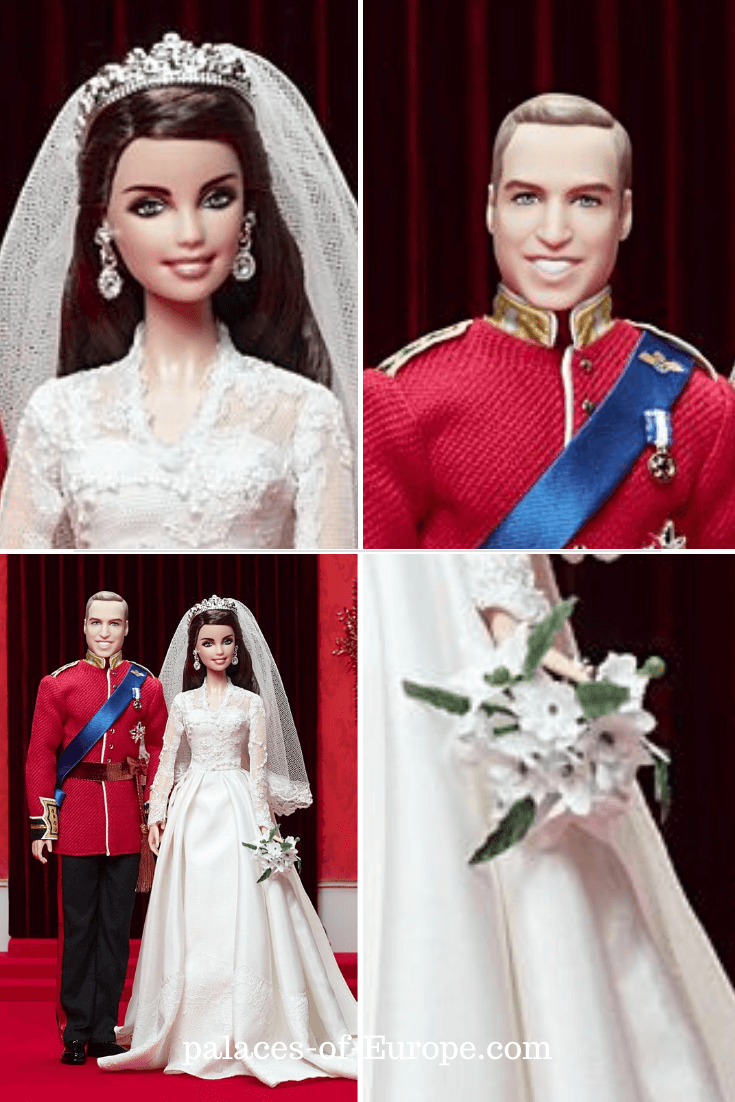 Only 22500 sets are made of this Royal Wedding Gift Set. The Royal wedding in question is of course that of Catherine (Kate) Middleton and Prince William, Duke and Duchess of Cambridge. The gift set commemorates their one-year wedding anniversary.

The Catherine doll wears a dress inspired by the real wedding dress. It is completed by her silvery Tiara, earrings and of course her engagement ring. William is dressed in the brilliant scarlet uniform of the Colonel of the Irish Guards.

Find your happy couple on Amazon or Ebay.

The next three Royal Barbie dolls do not depict a person, but a whole era.

These 3 Barbie dolls are inspired by the world famous Imperial Easter Eggs of Fabergé that were created for the Russian Imperial family from 1885 to 1916.

The House of Fabergé is forever linked to the House of Romanov, and that is what these Barbies remind us of. The splendour and grandeur of the Russian Romanov court.

The dolls are inspired by Peter Carl Fabergé, who was running the company during the production years of the Fabergé Easter eggs (1885 to 1916).

From 1885 to 1893, during the reign of Emperor Alexander III Ten eggs were produced. He commissioned them for his wife Empress Maria Feodorovna.

His son Nicholas II continued the tradition and ordered two eggs each year, one for his mother, the dowager, the second for his wife Empress Alexandra Feodorovna. This resulted in a total of 50 Imperial Easter eggs, which are now priceless collector's items and museum pieces.

3 Porcelain Barbies were produced, all limited editions and not meant for the toy box. They were collector's items from the start.

You can also find Madame du Barbie on Ebay 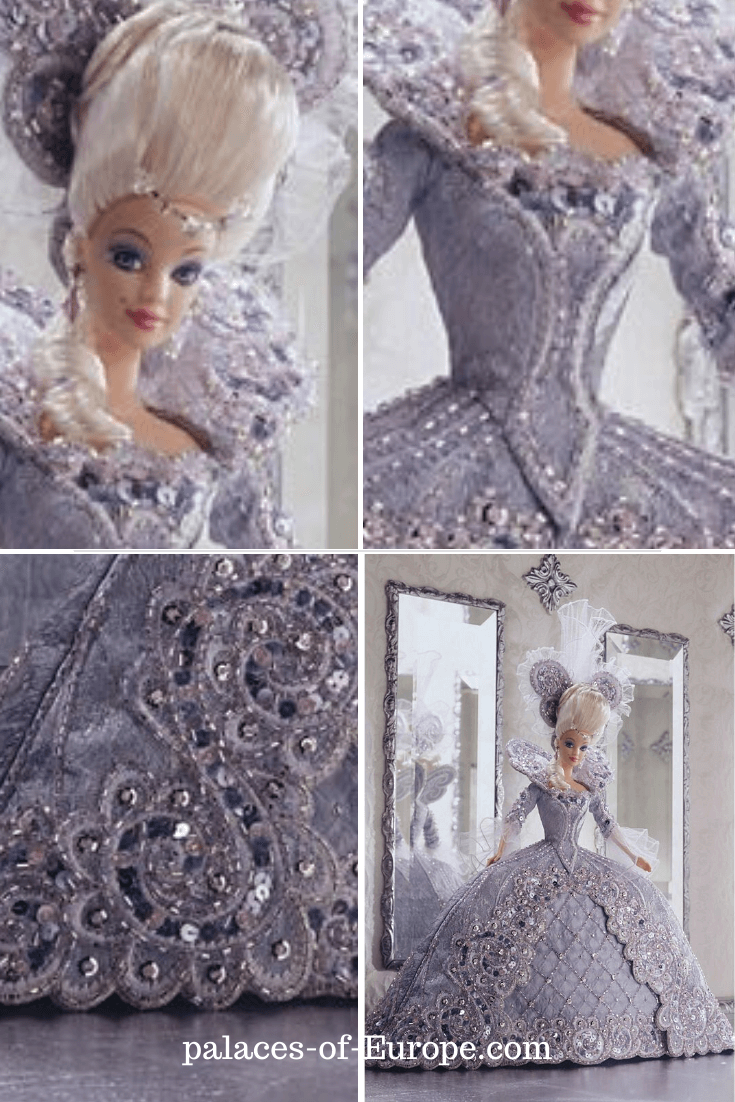 Madame du Barbie was designed by Bob Mackie, a fashion designer who designed lots of stunning Barbie dolls ( i found 85 on the Mattel website!).

This doll was released in a limited edition in 1997.

Madame du Barbie wears an ice blue brocade rococo gown. You can see her enter a ball at Versailles Palace in the eighteenth century and catch all eyes!

Her dress is embroidered with beads and jewels, shining in the lights of the chandeliers. Her outrageous hair is very stylish for those days, as are the feathers and the Mouche de beauté!

Grace Kelly has her own Barbie Collection! 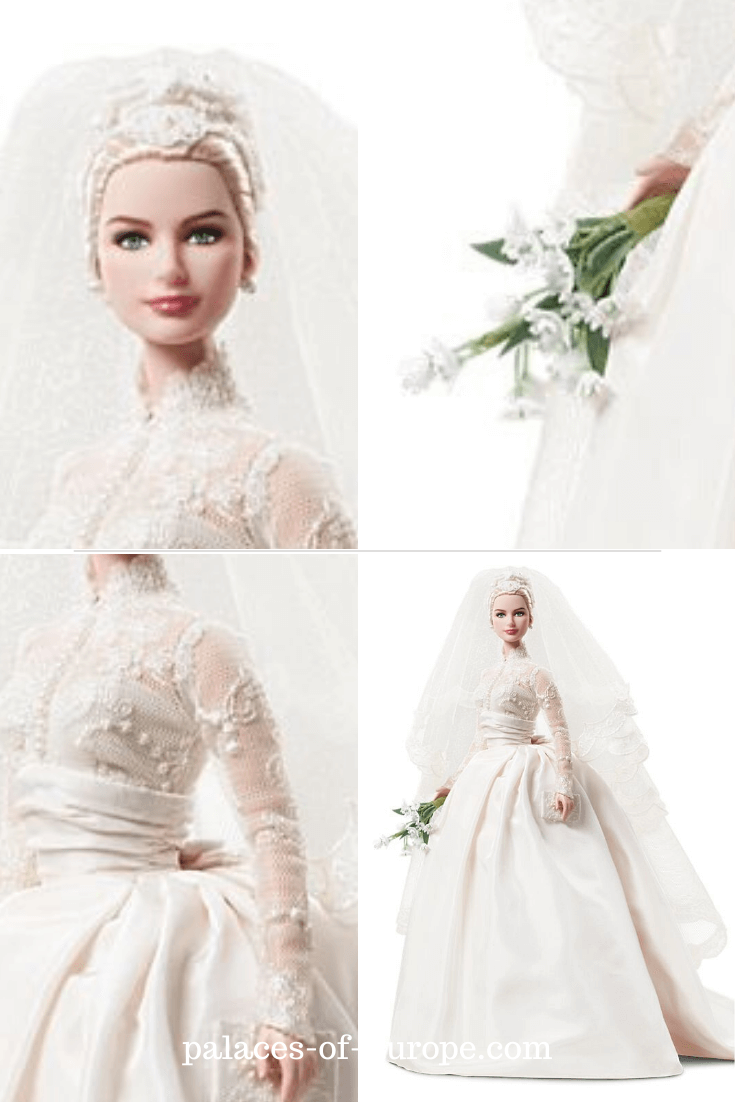 Almost last, but certainly not the least of this list, is the Grace Kelly The Bride barbie.

Crace Kelle, an American actress, became Princess Grace when she married Prince Rainier of Monaco in 1956.

Her wedding dress has been faithfully recreated for this Barbie® of the Fashion Model Collection. She carries a small ivory prayer book in one hand and a Lily of the Valley "bouquet" in the other. The finishing touch are the simple pearl earrings and the long tulle veil. 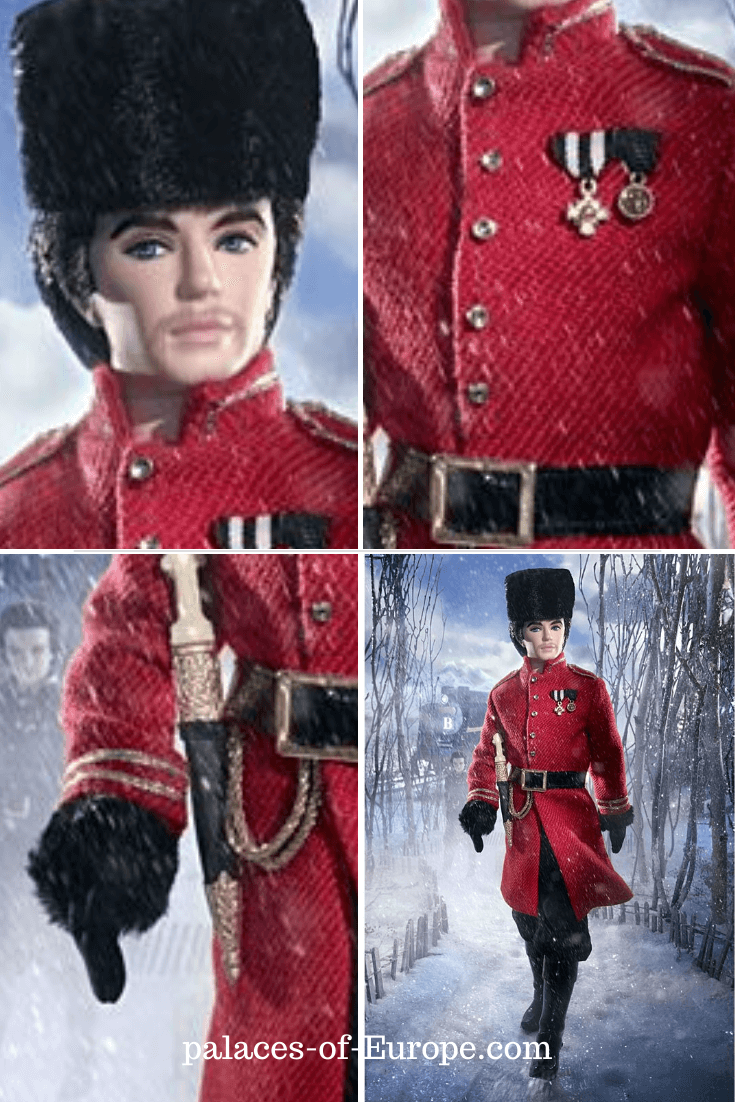 We cannot expect Prince William to take all these beautiful ladies to the ball all by himself. Therefore I have added Nicolai, to give him some competition!

A dashing Russian man in uniform to accompany the royal Barbies.  Only 4000 Nicolai Ken Dolls are produced.