Schloss Laxenburg is a vast complex holding a park and several buildings.The castle park is one of the most beautiful English-style gardens in Europe of 280 hectares. 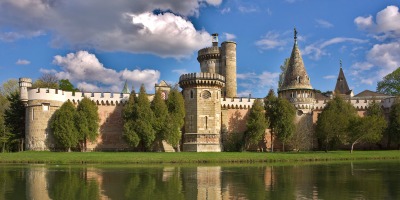 Schloss Laxenburg mainly refers to the “Franzensburg”, the main building in the park that is open to the public. It was built by the Habsburger emperor of Austria Franz II and his grandmother Maria Theresia and was completed in 1835. The replica of a medieval knights castle was never meant to be inhibited. Instead, Emperor Franz II build it to celebrate the history of the house of Habsburg. He brought together all kinds of items from other castles and monasteries throughout the country. 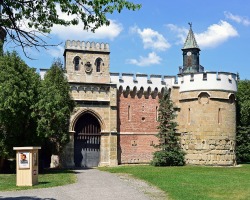 The result is a fairytale castle with numerous different treasures from around Austria on an artificial island in the lake.

Even though no one ever lived there, it Is an interesting place to visit. You can find all kinds of statues, paintings, furniture and pieces of architecture from various periods of the house of Habsburg history.

Around the castle grounds are several other buildings, grottos, temples and a medieval tournament site. 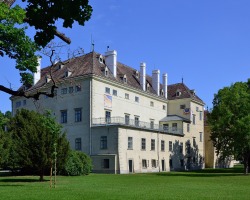 The first castle that was build in this area was the Old Castle, built by the Herren von Lachsenburg.

In the 14th Century, this family went extinct and the castle became the property of the Habsburg family who turned the place into a hunting lodge.

In 1683 the Turks laid a siege on Vienna and destroyed everything around the city, including this Castle. Today only the old core of the castle can be seen, and the reconstructions and enlargements that were made later. The castle is not open to the public.

The chapel of the castle dating from the 13th Century, is still being used for concerts, weddings and other festivities. 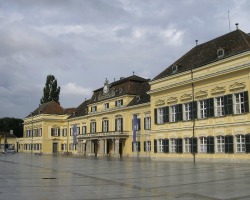 The second building was the "Blauer Hof" (Blue Court), build in the 15th century.

This lovely baroque palace was a favourite summer residence of the house of Habsburg monarchs. Here emperor Franz Josef and his new wife Empress Sisi spend their honeymoon.

The scenery is romantic enough, you would think. But the emperor of Austria had to rush back to the Hofburg in Vienna every day as a diplomatic crisis demanded his presence. This meant that Sisi spent her honeymoon practically alone. A fiftheen-year-old girl, surrounded by a crowd of courtiers she did not know. And of course her mother-in-law Sophie.

The only fun she had was horseriding through the Laxenburg woods all day, much to the disapproval of Archduchess Sophie.

The imperial family continued to have their annual spring break at the Blue Court. Both Gisela and crown prince Rudolf were born here.

Crown Prince Rudolf and his wife Princess Stephanie also spent their honeymoon here. Probably just as romantic as the one his parent’s had since this was an arranged marriage. Their daughter and only child, Archduchess Elisabeth, was also born at Laxenburg Castle.

During the conflicts with Italy and Prussia Elisabeth used parts of the building as a hospital for wounded soldiers.

The former palace theatre and imperial dining rooms are used as a conference centre now. The Blauer hof houses the headquarters of the International Institute for Applied Systems Analysis.

Look for a hotel near Laxenburg castles, Schloßplatz, Laxenburg, Austria