Bourbon kings, The House of Bourbon, ruled over France from 1589 until the French Revolution of 1792.

On this page you will find the genealogy of the 3 Bourbon Kings that lived at Versailles palace between 1682 and 1789.  I also added the Dauphins. This title was used for the French crown prince.

Not all heirs to the French crown would grow up to become king. 3 Of them remained the Dauphin of France all their life. The king would outlive them.

The kings of Versailles often had one or more mistresses. The maîtresse-en-titre (chief-mistress) often had their own apartment in Versailles Palace.
I have only listed the legitimate wives and children of the Bourbon Kings and the Dauphines of France.

The Mistresses and their children will need a separate page, as there are many. 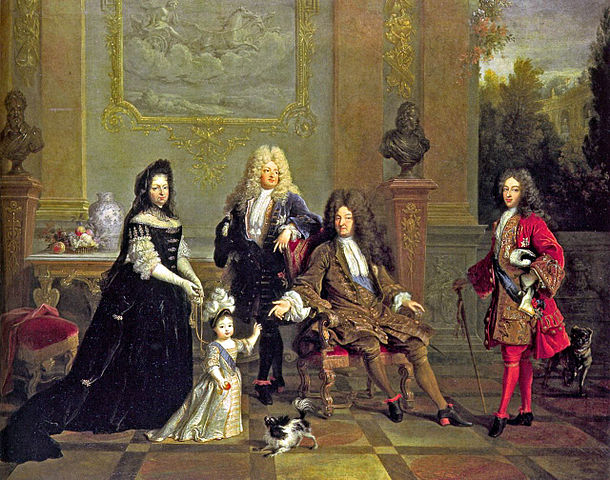 Louis XIV and His Family "At the centre of the portrait is the Sun King, Louis XIV, most illustrious of his dynasty. His father (Louis XIII) and grandfather (Henry IV) are shown as busts. At the King's right is his son, Louis the Grand Dauphin; to the king's left is his eldest grandson, Louis, Duke of Burgundy. Both predeceased Louis XIV. The king gestures to his great-grandson, Louis Duke of Brittany, symbolising the older man's approval of his young heir. Madame de Ventadour, the young duke's governess (and the only non-royal in the painting) holds her charge's reins. Her presence references her role in "saving" the dynasty in the measles epidemic of 1712. The painting was probably made for her." from wikimedia

Louis married Maria Anna on 7 March 1680.  They had 3 sons.
Louis was the only son of Louis XIV, but did not outlive his father and thus never became a Bourbon King. He was dauphin of France his whole life.

Louis and Marie Adélaïde married on 7 December 1697. They had 7 children, 4 of them were stillborn.
The grandson of Louis XIV became the official Daupin of France when his father died in 1711. Unfortunatley he too died within a year and never became king of France.

As you can see above in the years 1711- 1712 disaster struck for the House of Bourbon. Both the father, (Louis le petit Dauphin) and brother (Duke of Brittany) of Louis, Duke of Anjou died of measles.

His grandfather (Louis le grand Dauphin) died a year earlier in 1711, leaving the two-year old Louis as the sole heir of the Fench monarchy. In these horrible years also his mother and other members of the family died of the same disease.

Marie Leczinska married Louis XV 5 September 1725. They had never met each other before this day.  They had 11 children, of which one stillborn.

The family of Louis Ferdinand, Dauphin of France

Louis Ferdinand married Maria Teresa on 18 December 1744. She was the daughter of King Philip V of Spain, the brother of Louise the petit dauphin, and therefor the first cousin of Louis XV. She died three days after giving birth to her only daughter Princess Marie Thérèse of France (19 July 1746 – 27 April 1748). She was only 20 years old.

Since there was no heir it was important for Louis to get married again soon.

He married Maria Josepha on 10 January 1747. They had 8 surviving children. Maria Josepha had 5 more children who were stillborn.

Louis Ferdinand was the father of three kings of France, but never became king himself. He died of tuberculosis in 1765, when his father was still alive.

The fifteen-year old Louis married the fourteen-year old Marie Antoinette on May 16th 1770. They had four children. They were the last family to live in Versailles Palace. They left Versailles 6 October 1789 by force and moved to the Tuileries Palace in Paris.