Since its construction in the 11th century the chateau de Fontainebleau has been continuously inhabited by French royals for eight centuries.

Fontainebleau Palace, since 1981 on UNESCO's World Heritage list, has been used by all important sovereigns of France. Some of the most famous inhabitants of the Fontainebleau Palace are Madame de Maintenon (the mistress and later the second wife of Louis the 14th), Marie-Antoinette and  Josephine de Beauharnais (first wife of Napoleon Bonaparte). 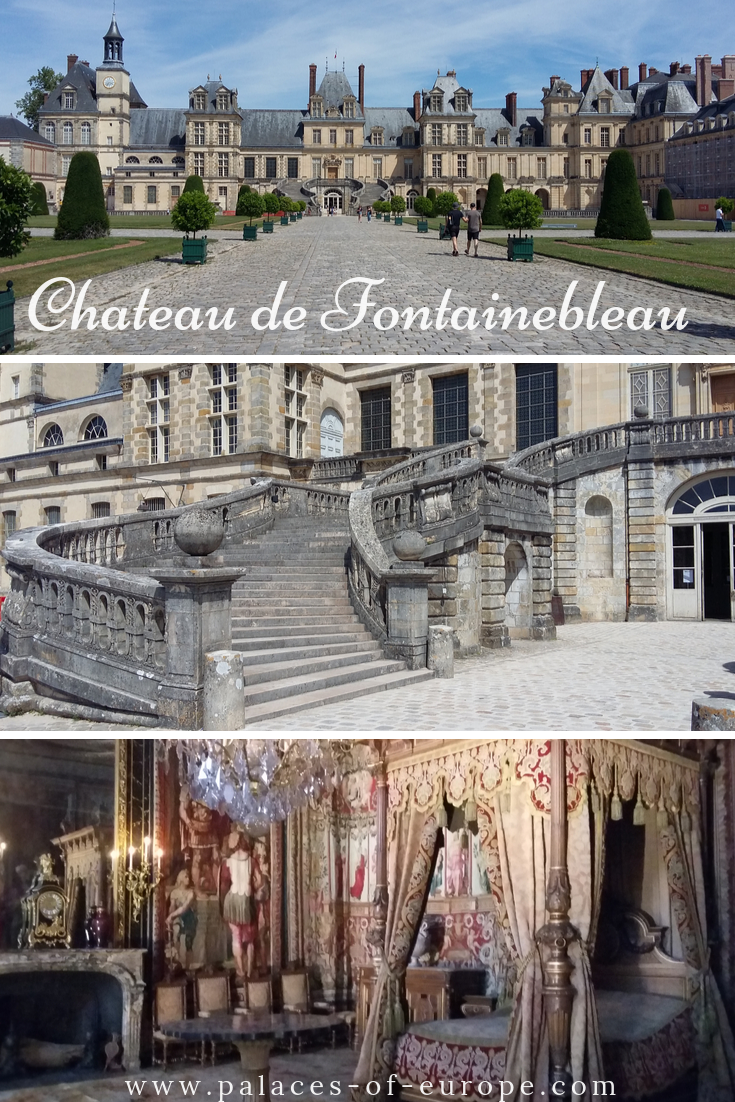 The first thing that strikes me when approaching Chateau de Fontainebleau is how quiet it is. If you have visited Versailles Palace, you expect queues as far as the eye can see. Not at Fontainebleau, there are barely any tourists, and you can wander around the palace at your own pace. And the remarkable thing is, this palace is used by all the royals of France, while Versailles is only used by three (or four, if you count Napoleon, who spend some of his time in the Trianon Palace). 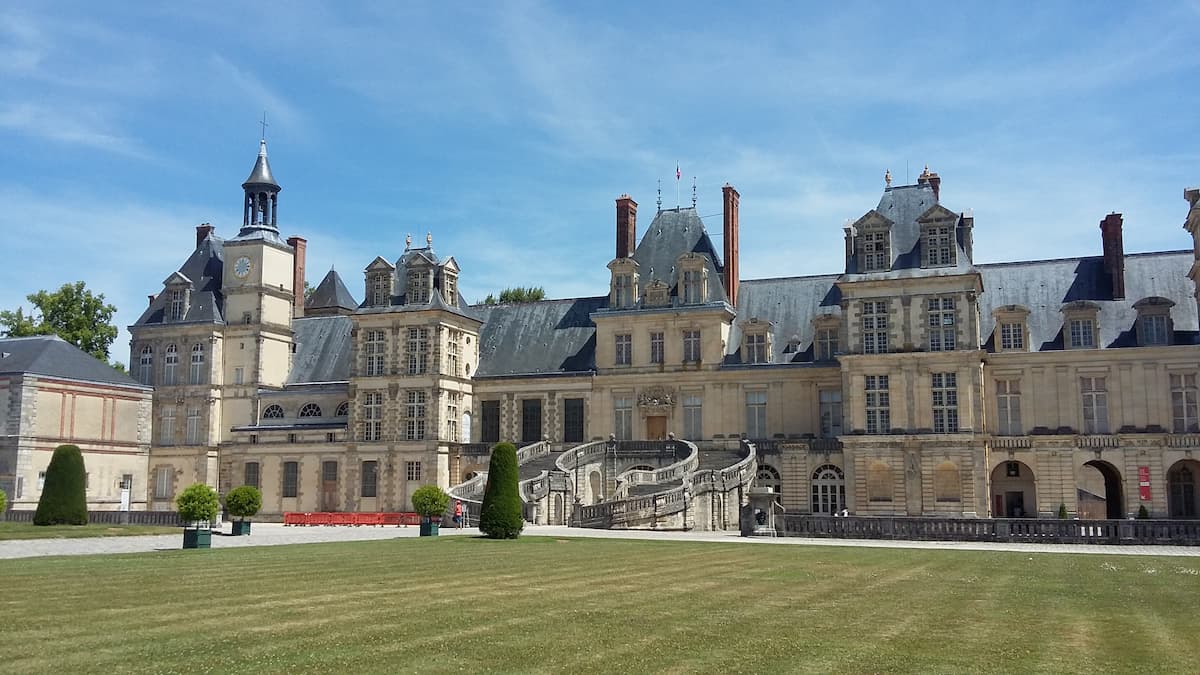 Under the supervision of all these monarchs the palace constantly was enlarged and embellished. The Chateau de Fontainebleau today is one of the rare French castles that stil is completely furnished. 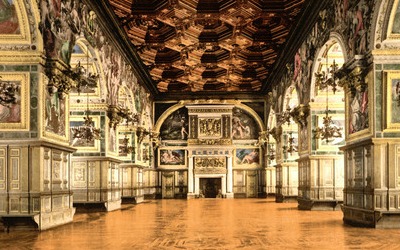 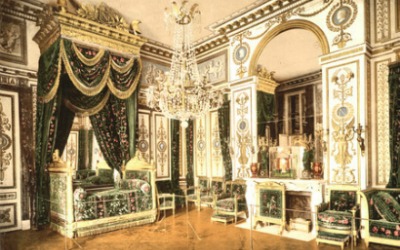 Bedroom of napoleon I, Fontainebleau Palace 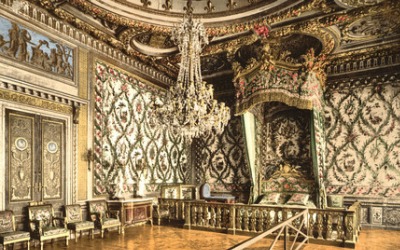 Schloss Fontainebleau is located in the town of Fontainebleau about 67 miles south of Paris. It was used as a hunting lodge as well as a House.

Nowadays it is surrounded by 130 acres of park and gardens, composed of more than 1500 rooms, and exceptional embellished with decorations and furniture. There are three chapels and a theatre. Today the Fontainebleau Palace is home to four museums. 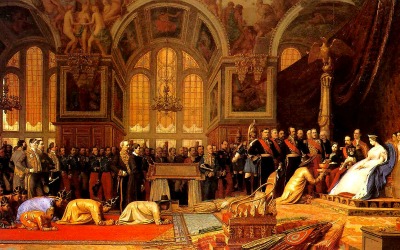 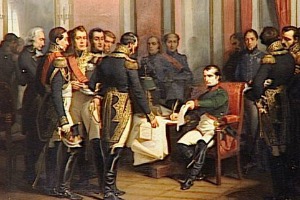 The Palace was often the scene of important historical events.

For the crowning ceremony Napoleon had Pope Pius VII come to the Chateau de Fontainebleau. Here he had an apartment ready for him full of stolen art from the Vatican. However, it was not his intention that the Pope would crown him; Napoleon put the Crown on his own head and then crowned Joséphine himself. With this act, he wanted to indicate that he was not subordinate to the Pope.

Bonaparte then established his throne room with impressive gilded eagles in the Castle.

Also the end of his reign took place at the Palace of Fountainebleau; He signed his abdication there and said goodbye to his troops from the stairs of the palace.

The castle was decor for many international meetings: There are 5 treaties of Fountaineblue, the first signed in 1785 by Emperor Joseph II and the Dutch Republic, and the last was the abdication of Napoleon on 11 April 1814. 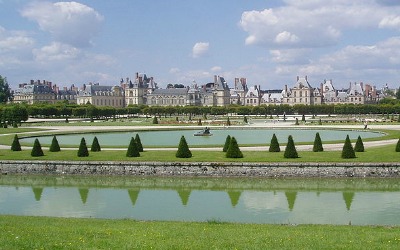 View on the gardens of Chateau de Fontainebleau

Some famous royals lived in this palace, and they all left their mark. Here are some of the most interesting rooms. 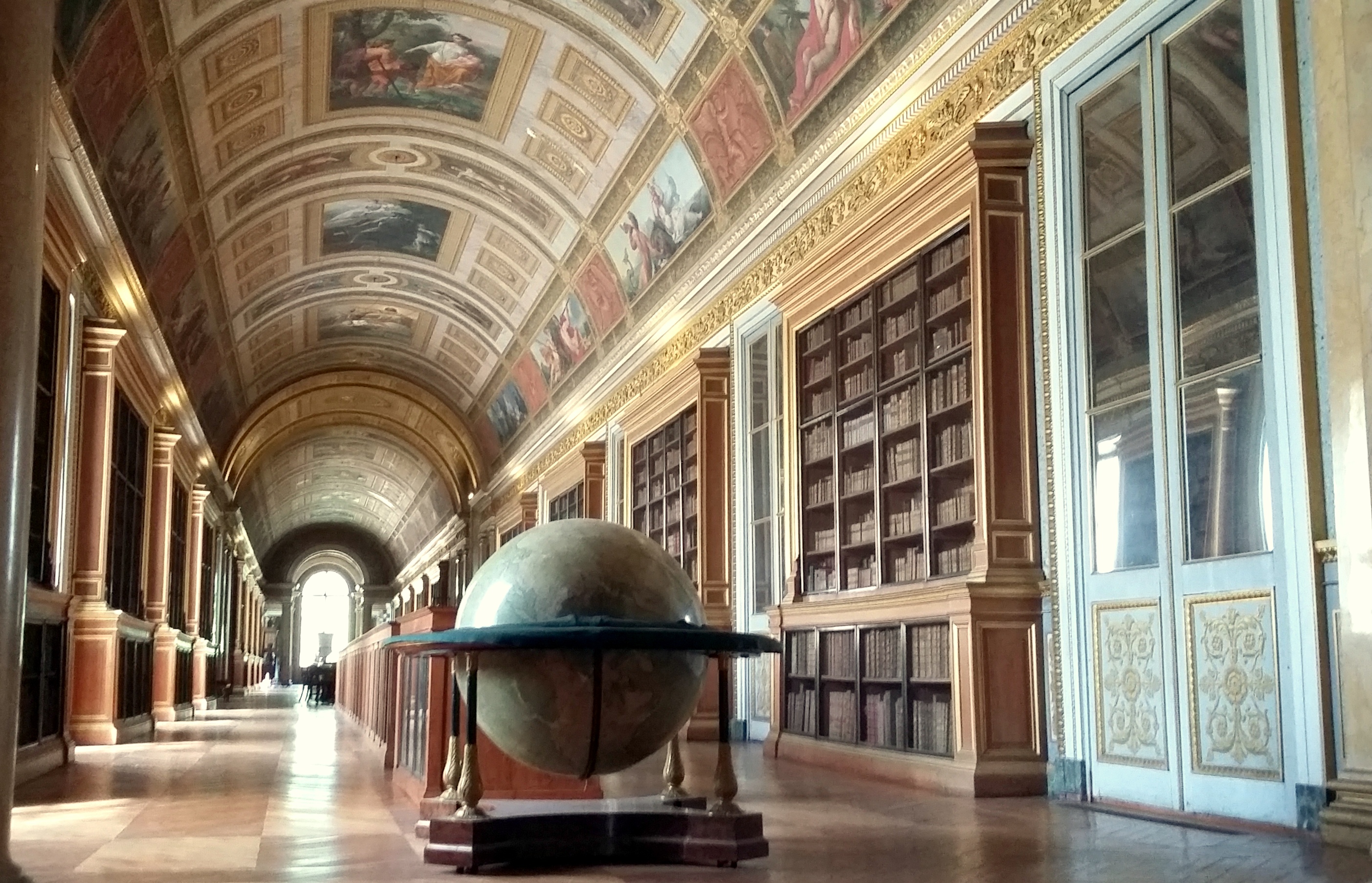 Napoléon III turned the former banquet Hall to a grand Library. The name of the room goes back to Henry IV who constructed it and had it decorated with paintings depicting the myth of Diana. Of course he was inspired by his mistress Diana the Poitiers! 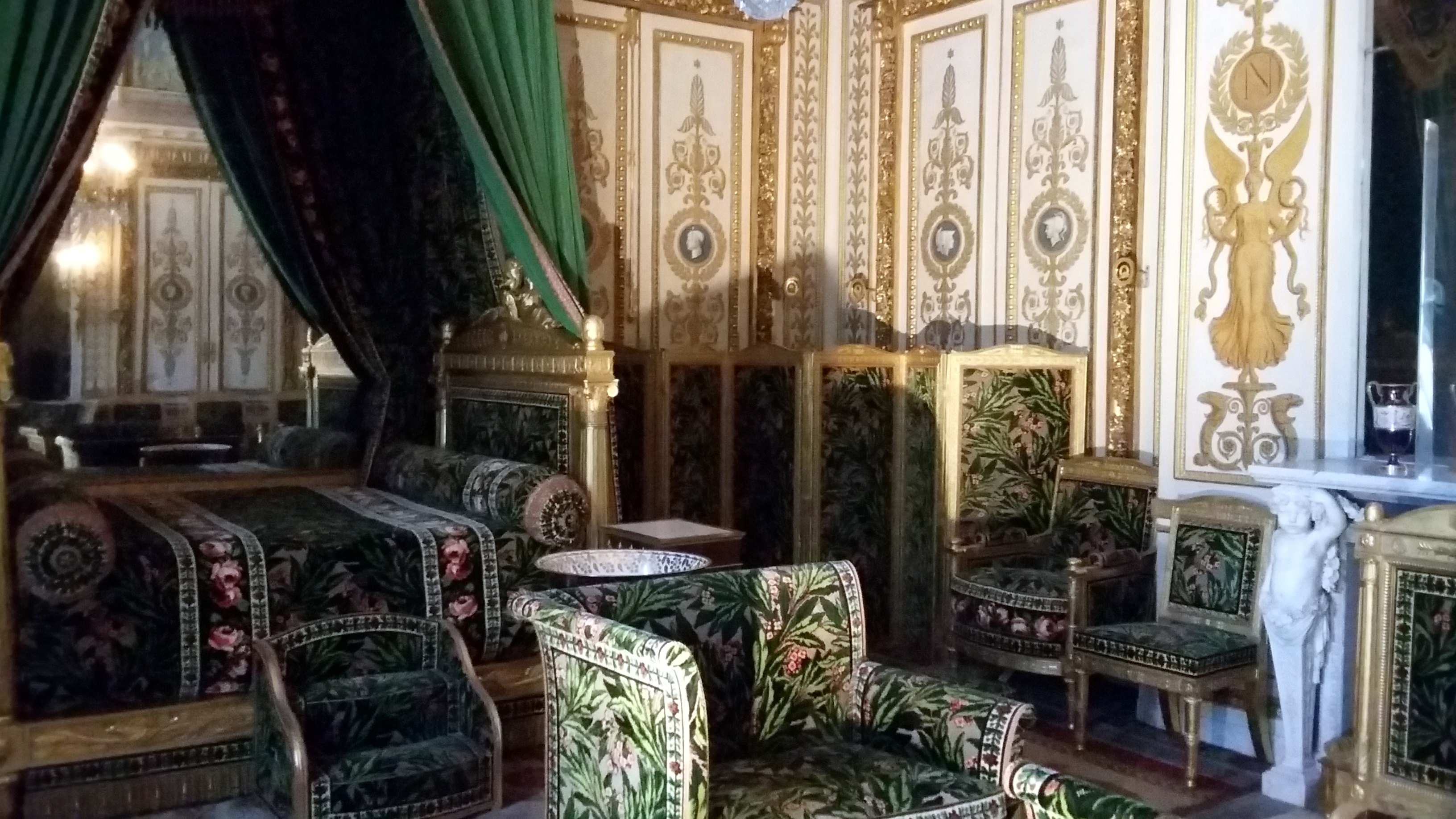 When Napoleon prepared his coronation in 1804, he had 40 apartments renovated for the arrival of Pope Pius VII, whom he invited to perform the coronation.  In addition he prepared lodgings and stables for the 200 people and 400 horses that the Pope brought along in his party. This bedroom's last royal inhabitant was Anne of Austria. 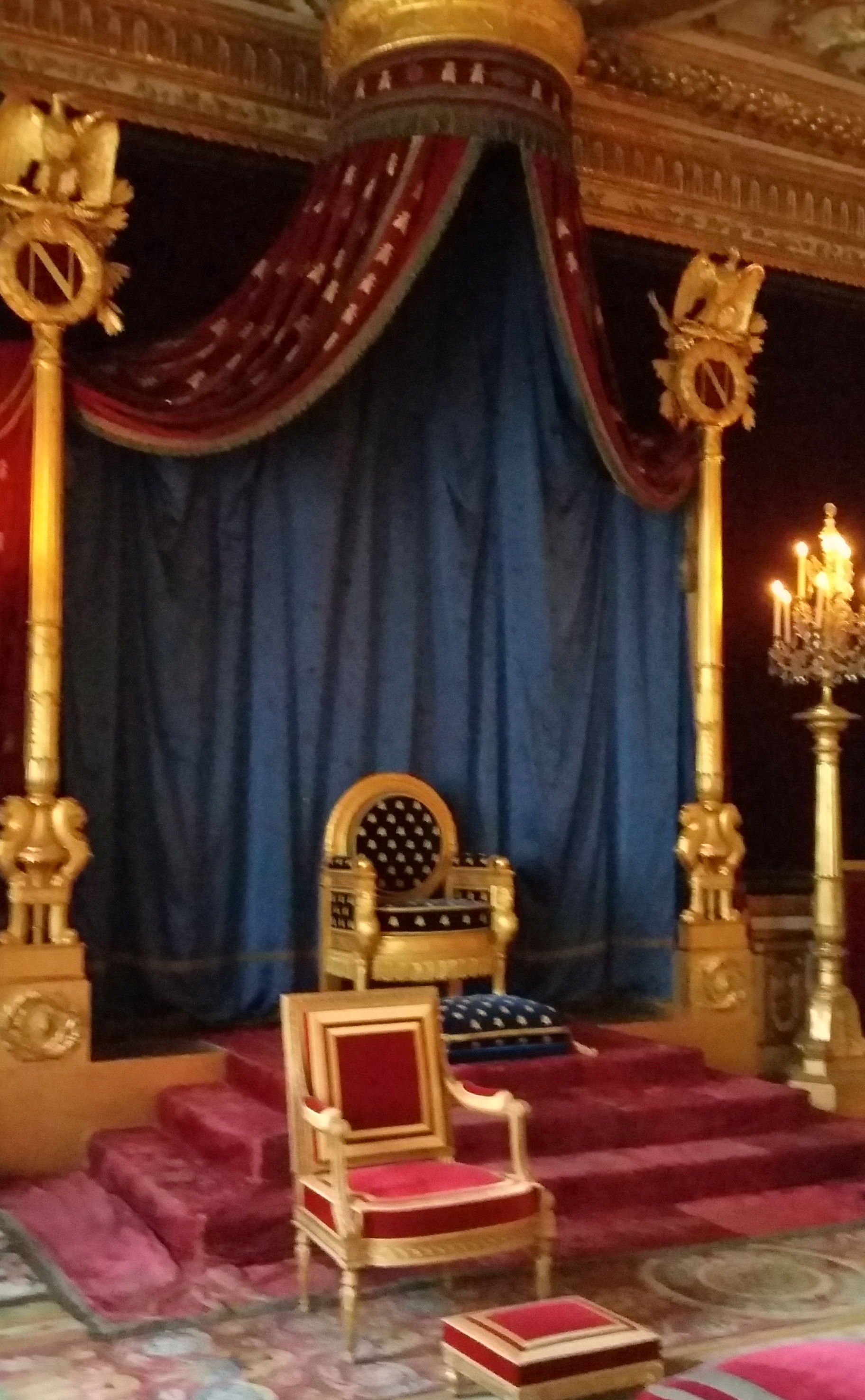 Napoleon made the Chateau de Fontainebleau one of his formal residences,. The only thing that lacked was a Throne room. He choose the former King's bed chamber for this, replacing the bed with this throne, that was originally designed for the Chateau de Tuileries. IIt is still in the original state of 1808. 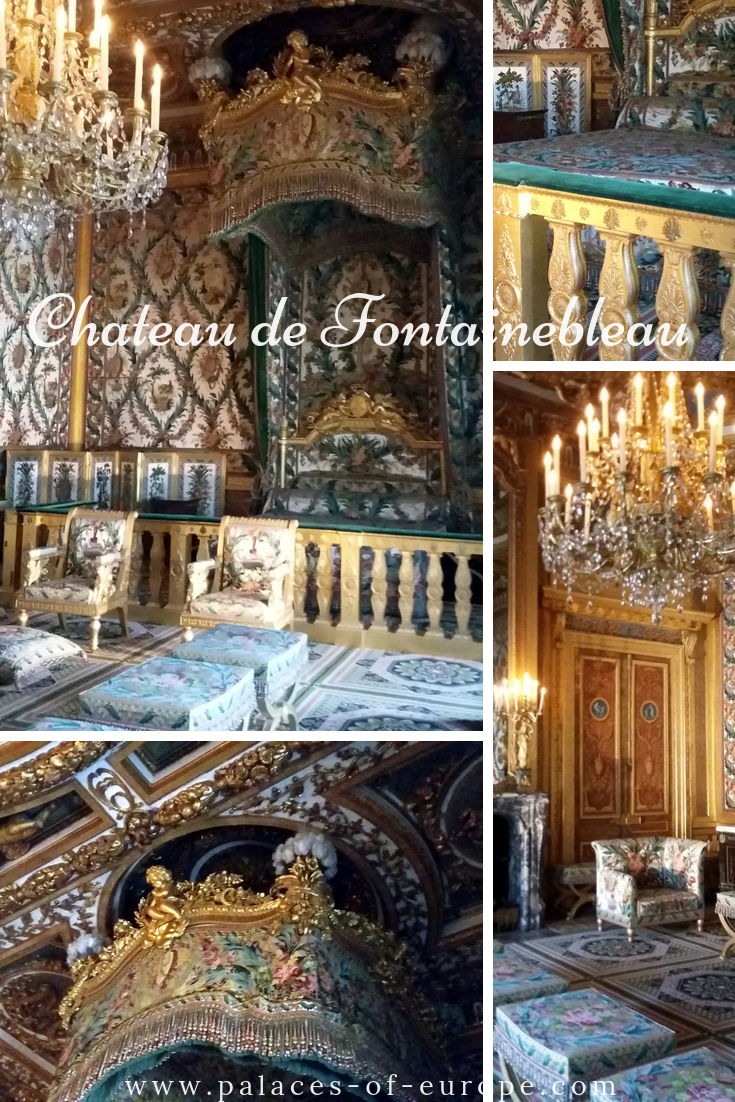 This room was used by all the Queens and Empresses of France. Surely, it looked a lot different when Marie de Medici slept here,. What you see today is merely the design that was made for the first Empire. The ceiling over the bed however originates from 1644, made for Dowager Queen Anne of Austria, the mother of Louis XIV. So every queen after her, including Marie Antoinette, gazed at the same ceiling when lying awake.

The Grands Appartments: €11 (€9 in combination with a guided tour*)

This tour includes the Papal Apartment, the Renaissance Rooms, the Chapel of Saint Saturnin , the sovereign Grands Appartements, the Diana Gallery and the Napoleon I Museum.

*Some areas in the Palace can only be visited with a guided tour.

Visitors who buy ticket  for one of the guided tours can purchase a reduced-price ticket for the Grands Appartements.

The ticket to this tour also allows access to the Grands Appartements.

Chateau de Fontainebleau is open every day except Tuesday, January 1st, May 1st and December 25th.

Here you will find hotels in Fontainebleau. Some suggestions: